A Railroad Still Runs Through Here 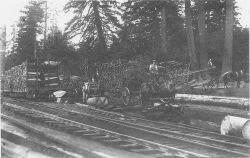 Most of us who live on the Hill are aware that a railroad cuts through our neighborhood. Even for those who rarely give a thought to its existence, evidence of its presence is sometimes hard to miss, especially when you are driving up Cornelius Pass Road from Highway 30 and suddenly see train tracks disappearing under you as you negotiate the hairpin curve near the top, or when you are out walking in the morning and hear the sounds of a train blowing its horn and revving up its engines as it pulls its load up the pass. But doesn’t this seem an unlikely route for a railroad? What motivated the people who originally built it, and why, when so many other railroads have been abandoned, is it still being used?

If you trace its route over the pass from its junction with the St. Helens-Rainier-Astoria line (just over a half a mile northwest of the Sauvie Island bridge), you will be amazed at the challenges its builders had to face. The tracks pass under the highway, which they briefly parallel before making a broad curve south to begin their climb uphill. As they approach the top, they turn to tunnel some 4000 feet through solid rock under Skyline Ridge. Then, shortly after emerging from the tunnel, they cross over Rock Creek on the Rockton Fill (originally a lengthy trestle) and, nearly three quarters of a mile later, traverse Dick Creek on the breathtakingly high Holcomb (or Smith) trestle before finally reaching the valley floor near Helvetia. The engineering and construction costs of seeing the project to a successful conclusion must have been enormous. What could have induced the builders to pour so much money into it?

One of our neighbors, Leon Speroff, has written a fascinating article on the history of the railroad which helps answer this question. Much of the article is devoted to showing how the construction of “our” railroad related to other projects in the Portland area being undertaken at the same time. It is a complicated story that is too long for publication in the Ridge Runner but that will soon be posted on SRN’s website in its history section. It makes several points that are relevant here, however.

One is that the period from 1900 to 1910 was a heyday for railroad construction in the Portland area, which was enjoying a population boom at the time; and another was that much of this activity reflected the rivalry between the two leading railroad titans of the era, James J. Hill with Northern Pacific and Edward H. Harriman with Union Pacific. The competition between the two men was fierce. Both hoped to capture as much as possible of two rapidly growing markets:  1) providing passenger service (remember, automobiles were only just beginning to become available to none but the most wealthy at the time) and 2) transporting timber from the still seemingly endless forests of western Oregon. It was a rivalry that would ultimately lead to Portland having what must have been one of the most remarkable networks of electrified interurban rail transportation in the nation at the time.

“Our” railroad was one of the last pieces to become a part of that network. In 1909, Hill saw the potential in a small railroad, United Railways, running a line from downtown Portland to Linnton and Holbrook with plans to move on further over Cornelius Pass to the Tualatin Valley where it could connect with a line to Tillamook. He purchased the railway later that year but kept the transaction secret until May of the following year when work on the final part of the plan, tunneling under the top of the pass, had already begun. With Hill’s resources behind the project, its future was secured and the long history of its relationship with our neighborhood could begin.

During the first two decades of the railroad’s presence—and even into the early 1930s—that relationship was quite close. By the summer of 1910, over 1,000 men were at work on the tunnel, most of them commuting to the site by rail. The noise of drilling and blasting, along with a cacophony of other unfamiliar sounds caused by machinery, the dumping of debris and the frequent arrival and departure of trains (even though they were run by electricity) must have been startling in a landscape where farming was still done with horses and trees were felled with axes and two-man crosscut saws. The railroad tracks, meanwhile, had been extended uphill and south beyond the tunnel entrance nearly to the top of the pass, close to where the Plainview Grocery is located today. It is sometimes said that at this point they formed a loop so the trains could run back downhill facing forward. This would also have provided a convenient loading place for the cordwood that had already become a valuable source of income for many hill farmers at a time when almost all heating and cooking in Portland was done with wood.

The tunnel was finished in February, 1911, and officially opened the next month, by which time it seems the trestles to the west were also finished, and the line was ready for business all the way to its end point in Banks. There it connected to lines to Gales Creek to the south, Tillamook to the west and, later, Vernonia to the north. Closer to the hill there was also a branch, at Bowers Junction just before Helvetia, which headed south to connect with the Oregon Electric line (which had been also been acquired by Hill) in Aloha.

There were two regular stations in the SRN neighborhood, one in Folkenberg and the other, Rockton Station, at the west end of the tunnel and just before the long trestle built over Rock Creek. The line provided both passenger and freight service and, for a while at least, maintained regular, fairly frequent schedules. Moreover, fares, at least by present-day standards, were quite affordable. For residents of what was then a relatively remote community like ours, for whom travel for any distance meant going by horse wagon over bumpy gravel or gravel-and-plank roads, the effect must have been revolutionary. Making a day trip to Linnton or even Portland had suddenly become possible. The United Railway’s passenger service was never very profitable for the company, however, especially not in comparison with other interurban lines in the area, such as the Oregon Electric lines to Forest Grove and Salem, but it continued, with occasional cutbacks until the 1930s, around the same time that the company tore down its electric lines and moved to steam engines.

It fared much better with its freight operations, especially after it acquired the Vernonia line in 1923. Hauling logs and lumber became a central focus of the company’s activities, and the Hill neighborhood also took part in this branch of the railroad’s business. There have been a number of different sawmills on the Hill over the years, some of the more transient variety known as gyppos, some more long-lasting. The forests up here could yield more logs than these mills could handle, however, and at least one logging company built a temporary rail line along lower Rock Creek to haul its logs up to the sidings near Rockton Station, where they could be transferred to larger railcars for further transit. Such logs, along with others coming from places like Vernonia and Gale’s Creek near Forest Grove, would then be hauled to so-called log dumps along the Multnomah Channel where they would be lashed together into log rafts to be taken by tugboats to larger mills elsewhere along the Columbia and Willamette rivers.

Log rafts, which used to be a common sight on Northwest waterways, have now pretty well disappeared, but hauling logs still remains a major source of income for the company that now owns the railroad. In fact, logs constitute virtually all the freight now moving over the pass. Instead of being dropped off into log dumps, however, they are now being hauled to a barge terminal in Rainier. And instead of coming from Vernonia or Gale’s Creek, they are coming from places as far away as Eugene. Railroad companies, like banks and grocery store chains and many other companies in our society, have undergone enormous changes since the end of of the second World War. The United Railways merged in 1944 with Spokane, Portland and Seattle, another company once controlled by James Hill. That railroad in turn merged with the Great Northern and others to form Burlington Northern in 1979, which thereby became the dominant long haul railroad company in the northern tier of states stretching from Chicago to Washington and parts of Oregon. Various other mergers and buyouts followed, along with a decision to divest itself from many of the smaller, feeder lines it had acquired in the process. The former United Railway line was one of these, and in 1997 it was sold, along with a group of other such lines in northwest Oregon and the Willamette Valley, to Genesee & Wyoming, a railroad holding company that was already actively acquiring divested feeder lines elsewhere in the country. Here it quickly went about combining the separate lines it had purchased into a single entity, the Portland & Western Railroad, which stretches from Eugene to Astoria.

Our section of the railroad had been out of service since 1994, however, due to a fire that had destroyed a wooden trestle only a mile or so before the line passed under highway 30. Fortunately the new owners chose to replace the trestle with a steel bridge, and within a year the line was back in operation. Over the years, there has been talk of abandoning this portion of the Portland & Western Railroad, and for a while there were even suggestions that it should be turned into a rails-to-trails project similar to what happened with the Banks to Vernonia line that had also once been a part of United Railways. But I for one would be sorry to have the sounds of passing trains go silent. “Our railroad,” as I like to call it, has been in existence now for over a century. It is a living connection with the neighborhood’s past, and I hope it will long remain so.
RR Jan. 2015