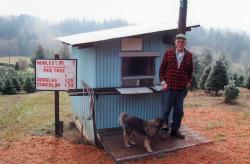 Huserik? Does the name sound familiar? It might spark memories of a popular teacher from the old Skyline School Days, Ramona Huserik (Andy Huserik’s sister-in-law who passed away in June), or perhaps cutting a Christmas tree at Andy’s tree farm on Germantown Road. There were grew up on Old Germantown Road and several continue to live in the area today.

Andy’s father, Paul, emigrated from Czechoslovakia in 1911 and eventually purchased 40 acres which included a .5 acre piece that had been deeded to Liberty School. The immigrant’s future wife arrived later. The Huseriks moved into the house that was then on the property but in 1929 built a new house, further up the hill from Old Germantown Road.

Andy’s garage is built where the old house originally stood. Before the new house was built a well was dug to the depth of 127 feet. Andy remembers that the well cost $3 a foot and he has the original paper signed by the driller to prove it! It was quite a bargain as the well is still in use. Andy bought the property from his brother and sisters in 1986 and built his present home in 1988 where he continues to live.

Andy, the youngest boy of the Huserik family (he had a younger sister), was born in 1925 on the family farm. The 40 acres is now down to 20 acres, and includes the tree farm that many of us know. Andy is a tall, distinguished man who speaks with a delightful accent while recalling growing up in the rural Skyline area.

Andy and his siblings initially attended Liberty School which was a one room school with 29 students. The teacher, Mary Traxell, walked from Bruggere Road to school each day. The old school building remains in its original location on Old Germantown Road, and is now a private residence.

Andy remembers when road crews straightened Germantown Road (which ran through their property.) because its turns were too difficult for the new Model Ts to navigate. At that time he was probably in the 3rd or 4th grade. He and his brothers, like typical boys, loved to watch the men work.

An enthusiastic fisherman in his younger years he also trapped skunks with one of his brothers to make money. They would tie a 10 foot wire to a trap, put the trap in the skunk’s burrow and then tie the wire to a tree. Eventually they would pull the skunk out of its burrow by the attached wire and attempt to club it before it could spray them. They would skin the critter and dry the hide on cedar planks. Hides sold for $1-2 each. On one occasion they failed to avoid the skunk’s aim. Andy recalls how they hurried on to school where the teacher recognized their error and immediately sent them home. Their mom chased them to a ditch, giving them her homemade soap to scrub themselves and the clothes. It was several days before the clothes were again wearable!

These minor mishaps did not deter Andy and his brothers from trapping, and they evidently perfected their art. In high school Andy trapped muskrats and sold the skins for $2 apiece. One spring Andy caught four muskrats and made $8 by selling the furs to Sears and Roebuck in Spokane.

The Huserik family raised both rabbits and beef for meat. Their mother would cut the meat into quarters and can it in half-gallon jars. Andy fondly remembers that as the best tasting meat imaginable. He and his brothers were tall, strapping young men. They did the usual work that farm kids did to earn money: picking strawberries, chopping wood, and working in the fields during haying. Additionally, they also played football for Beaverton High School. They had to walk home after practice and games, but were usually able to hitch a ride from neighborly folks.

In 1964 Andy began raising Christmas trees, although he is no longer planting new ones. His tree farm is on the acrage where he resides. This area was originally old growth forest where the older Huserik boys would cut the trees into 16 inch long pieces for the cook stove. The tree stumps would eventually be “grubbed” or blasted out. Andy remembers that he and his brothers used to have a “hoot fest” communicating with the hoot howls and big horned owls that inhabited the area.

An annual tradition at the Huseriks, before World War II, was the “Spud Bowl.” After Thanksgiving, when the potatoes had been dug up, families from Helvetia and North Plains would come for a day of touch football “on the softest ground you can imagine.”

Andy spent 2 years in the Army in the Philippines and Japan. Five of his brothers also fought in WWII and participated in the heaviest fighting in the South Pacific. After the war, from 1947 – 1950, Andy worked for a logging company in Tillamook where he had the difficult job of “chocker setter.” He would fasten a choker around the log to hold it steady so that it could be pulled out of a canyon.

After that he worked as a second rigger whose job was to tell the chocker setters what logs to put the chocker on. While Andy was working as a logger, he and another young man who lived in the forest camp gathered foxglove (digitalis) that grew abundantly in the area. They were able to take it into Tillamook where it was used as heart medicine. They earned $8-10 apiece. Andy has had jobs in construction as a pile driver, and worked for the Port of Portland in dock maintenance - rebuilding docks from the pilings up. It was from this job that he eventually retired to focus on his farm and fishing. He also found time to be one of the first volunteer fire fighters in our area and was chief for two years, eventually resigning his position when the tree farm demanded too much of his time.

Andy continues to be active, fishing and maintaining the tree farm. His experiences and memories of the “ridge” provide wonderful insights into the history of this area.
RR0409