​An Insect Even More Annoying Than Boxelder Bugs?! 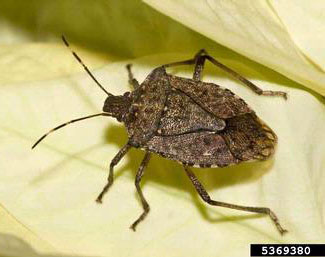 Photo: Bugwood,org
​By Kim Johnson
​
We have a new visitor to our house this year. In previous years our winter home was full of mild mannered box elder bugs. They were on the ceiling, next to the bed, in our coffee cups and generally on any surface you wanted to set something down. I respected those box elder bugs, they had the good sense to stay still while you crushed them with a seed catalog.

Our new resident is the brown marmorated stink bug. I didn't know what the word marmorated meant but I thought it might translate from the Latin for 'smells bad when smashed with junk mail.' My husband informed me that marmorated is actually a medical term, it denotes a condition in which the appearance of the skin is streaked like marble. My husband also informed me that I should really know that because I used to work in an insect lab. I reminded him that was a long time ago and I had to make room in my brain for other things #reallife, plus I was pretty sure insects had a chitinous exoskeleton and not skin, so I disagreed with the bug name on principle. The marmorated stink bug, does however, have a brown marble-like look to it which makes it blend in with tree trunks and rustic furniture from Pottery Barn.

The marmorated stink bug has a feature that makes it rather ill suited for life inside the house. Basically it smells really bad when you kill it. This little bug has holes in its abdomen which can emit an odor when injured. This really decreased the amount of people in my household that were willing to smash the bugs. The other problem with the bugs is that they sometimes emit the oder for no reason, like you just walked by or you accidentally nudged them off the rim of your coffee cup. It's like being in a house full of nervous little dogs that express their anal glands every time someone sneezes.

The bugs have another annoying feature. They become very animated in a warm room and they fly around haphazard like, bouncing off lights and walls, like a drunk uncle at a Christmas party. They will also fly around and run into people which unfortunately signals them to emit their unpleasant odor especially if the person is trying to bat the crazy bug away from their face.

I decided to collect my bugs and mail them to a researcher at OSU, after seeing a post on social media requesting them. I can only assume she was collecting the bugs for scientific reasons, but I didn't ask because I really wanted to send five hundred bugs priority mail- mainly so I could tell the people in the post office my package didn't contain lithium batteries or perfume-just the natural perfume of the marmorated stink bug.

Collecting the bugs was no easy task. I thought I had five hundred of them in my living room but it only turned out to be fifteen. I shoved them in the priority mailer anyway, trying to ignore the stench and dutifully drove them to the post office. I have no idea if they were received, the researcher took her post down the next day, probably over whelmed by the amount of people wanting to send her bugs.

We've learned to live with the stink bugs, giving them a wide berth, to avoid setting them off. Eventually they moved out or maybe just blended in with the furniture, hard to say, but there are definitely less of them. All in all, I'll take a box elder over a stink bug. They have the good sense to sit still when relocated. Or smashed. And they're odor neutral.