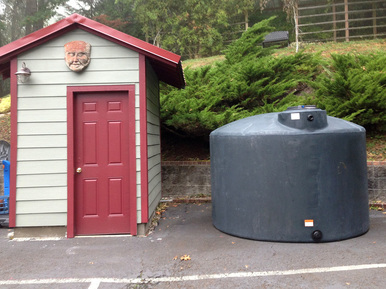 If you’ve lived up here for 23 years or so, the idea that your well could run dry might take a while to dawn on you. Run out of water? Up here? No way. Remember the rains and slides of ‘96? Remember summers so cold and wet that you just gave up and plowed the tomato plants under? Run out of water... sheesh. We don’t have to worry about running out of water up here! That’s for those chumps down in the Klamath Basin. All we have to worry about up here is making sure that the oodles and oodles of rain we always get don’t cause too much erosion. It’s all about water drainage up here, not water shortage. Right?

But then every summer, when it stops raining, and doesn’t rain for three months in a row—or maybe four months in a row this year—we irrigate about half an acre of garden out of our well.

Like I said, we’re a bit slow, but this summer it finally began to dawn on us that irrigating our big beautiful garden out of our one and only well might not be such a good idea. That catching some of each winter’s rainfall and using it for irrigation might be a better idea. That maybe we should look into building a pond to capture winter runoff that can be used later for summer irrigation.

So we began to investigate. Turns out, Oregon has a Water Resources Department, and the state is divided into water districts. We’re in District 20. Building a pond requires a couple of state permits—one to capture runoff and one to use that water for irrigation—as well as a sign-off from Fish and Wildlife (to make sure no critters are negatively affected), and some city (or county) land use forms. Luckily, each water district has a Water Master to point people in the right direction and to help them fill out the forms. (If you want to make a friend for life, tell her you don’t have a water problem right now, and you don’t ever want to have a water problem.)

These forms are all going to ask for an estimate of your current water usage. And it’s important to be as accurate as you can here, for a couple of reasons. One, the permit to enlarge a pond costs about twice as much as the permit to build a pond in the first place. So a mistake could be costly. Two, irrigation takes a lot more water than you’d think, and if you don’t plan big enough you’ll be looking at a mud hole for several months our of every year, not a pond. So the officials I spoke to all advised me to be as accurate as possible with my estimate, and then to add some.

Dave and I are at this point in the story. We got a water meter, but then we looked at all that pipe in the pump house and got cold feet about installing it ourselves, so we’re waiting for the pump man to come out and hook the meter up for us.

While waiting, we started thinking about how in hell we’d get to drinking water if that earthquake the geologists are promising us comes along, so we also bought a 1500 gallon water tank, which has already been delivered and is sitting next to our pump house as I type this line. We’re going to have the pump guys plumb it into our main pump when they install the meter, so that fresh water will circulate through the tank as long as the power is on. 1500 gallons = 2 gallons each a day for 4 people for 6 months.

And finally, beyond irrigation, beyond drinking, a pond, any pond, all ponds... a water tank, any water tanks, all water tanks, will come in very handy in the event of a forest fire, a situation that is becoming increasingly likely as our weather becomes increasingly hot and dry.

Here are some resources to get your started: