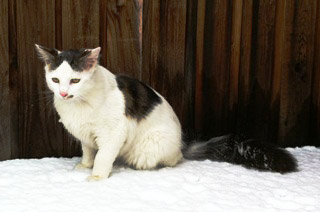 Bob the Cat: To Live or Die - That is the Question

I own Shadysprings Farm, a horse boarding facility on Rock Creek Road.  Last winter our horse trainer called me when she spotted an injured cat at the stable. She captured him and that was the beginning of “Bob’s” odyssey. This is a story of a sick kitty but also the story of people’s compassion and their love for animals.

She found one sick feline. He had a temperature above 104, severe dehydration, abscesses on both sides of his head, bloody urine and general weakness. At this point he could barely walk.
My small animal vet volunteered to come out and look him over. Fluids and antibiotics were on the agenda.  My house became an infirmary with pee pads everywhere, fluid bags hanging in the kitchen and meds on the counter.

We got his fever, infections, respiration and dehydration under control in a couple of days, but Bob continued to get worse.  When we found him we thought he had a 50% chance of recovery. Five days later I notified the barn ladies that I thought Bob was a goner with a 1% survival rate. He was to be named Lazarus if he survived. He surely would have to come back from the dead.

Bob could still eat Gerber’s baby food meats if I held his head up, but that was about all. He had become lifeless. The vet felt he had a skull fracture and was not responding neurologically. We discussed giving him 48 hours to improve.  I was giving the barn daily updates along with reports on Facebook. Bob had quite the following, with support coming from everywhere.
We loaded both cats, the dog, meds, fluid bags and pee pads to visit our other farm. Bob became a traveler.  We then had TWO houses that looked like infirmaries. Then things changed.

48 hours later Bob lifted his head. The next day his head and chest! When he lifted his head, he looked like a bobble head doll.  Michael took one look and called him bobble head. Voila Bob! His progress continued. He started to drag himself around by his front legs. Because of this the vet thought he might also have a fractured pelvis in addition to his neurological problems. She said I really needed x-rays. I didn’t have $300 so I approached my horse vet. She volunteered to do x-rays on Bob for free. I put out a call for monetary donations and many came to help, even the barn ladies. Everyone did his or her part. Bob’s x-rays looked normal except for a small chunk of his skull that had broken off. He continued to improve.

Now that we knew that Bob would make it. Donations could go towards a blood panel and to check for kitty diseases. Again I turned to the community and our great resources. My neighbour, Mary Cameron, is a veterinary technician at an emergency hospital. She volunteered to get the blood draws. My large animal vet sent it out for testing and my small animal vet reviewed the results.

Bob is much improved. He has a funny walk and occasionally tips over or gets confused, just like Michael. He attacks ants like he is a lion stalking an antelope and he fearlessly plays with our 100-pound mastiff.  He loves to cuddle and has doubled his weight. The only problem is he may knock something over because of his balance. We still have enough donation money to pay for vaccinations and my small animal vet is going to start his vaccinations next week.
Bob wouldn’t have survived if it weren’t for so many people volunteering their time or money- my small animal vet for driving here and examining him several times; my large animal vet for x-rays and lab work; our vet technician for getting blood samples; my barn ladies for digging into their pockets; and of course Michael, Mishka (our dog), and Diablo (our very mean cat) for allowing Bob to impact their lives.

We hope to find out Bob’s history. He is a neutered male. X-rays show a young cat between one and two. He uses a litter box and is familiar with cat doors. Perhaps Bob’s owner will see this story or picture, call me up with delight, knowing their kitty is safe.  Perhaps someone will see Bob’s picture and tell me what they know of his story.

We may never discover where Bob came from or what happened to him. Where does a friendly neutered male cat come from? Did a neighbor lose him? Did someone from the city dump him? How did he receive his injuries? I like my theory best. A coyote grabs Bob and has his head between his teeth. Bob fights back and frees himself, climbing up a tree so fast that he looses a hind nail. The more boring theory is that a car hit him. If only Bob could talk. One thing we know for sure. When Bob, (excuse me, I mean Lazarus) arrived here, he came to the right place. He has been told that many times over.

Update June 2012: Bob is doing quite well. He, along with Mishka and our cat Diablo, load into our vehicle for trips to Batwater. He will never be 100% but lives a normal life. He brings home a constant supply of mice and shrews along with live bunnies, chipmunks and birds. Most are traumatized but undamaged so I race to around the house freeing the critter. Of course, I end up with escaped critters when I remove Bob to another room. Upon my return, the victim is missing. We have decided he is a good mouser only because his victims stop to watch his uncoordinated movements.

It would still be nice to find out Bob's history. He was definitely someone's pet. I had hoped to locate them in case they were saddened by their loss. We love Bob too much now.  He is part of our crazy family. I'm afraid a custody battle would ensue.