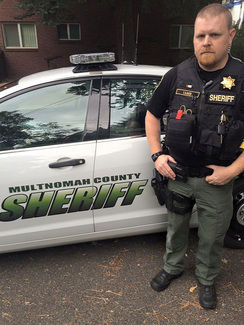 I am MCSO Deputy Daren Taber and I am your West Side Community Resource Officer.  I am very excited to meet the members of your community and to become a part of your community. The position of the West Side Community Resource Officer was discontinued a number of years ago but through the hard work and dedication of a number of your fellow community members, Multnomah County Sheriff Dan Staton and Multnomah County Commissioner Jules Bailey, the position has been reinstated.

My hope with this position is that I can partner with community members like you to help reduce crime and increase livability in your community.  I am not a patrol deputy, I am here to help with ongoing problems which will require more time than a patrol deputy can offer i.e. ongoing traffic issues, ongoing noise issues, gang issues, drug issues, neighbor disputes etc.  I am also here to mediate between disputing parties when other options have failed.

I am assigned to the areas in west Multnomah County covered by MCSO, including the communities of Skyline, Sauvie Island and Dunthorpe. I am currently based out of the Safety Action Team (SAT) office located at 18330 N.W. Sauvie Island Rd. Feel free to drop by and say, “Hi.” if you see my patrol car parked next to the building. In fact stop by and say, “Hi.” If you see any patrol car at the office.  I should be around the office Tuesday through Friday from 7am through 5pm. I will be out of the office often however as I am planning on getting out to meet people face to face as often as I can.

I can also be reached at wscro@mcso.us or you can leave me a message at 503-621-9211. Beware, that phone number is not manned and will only give you the option to leave a message.  If you have an emergency call 911 or if you need a patrol deputy to take a report for a non-emergency please call 503-823-3333.

I am hoping to develop an email list of community members who are interested in receiving a monthly email newsletter as well as emergency emails when an incident is occurring in the Skyline area.  I have already developed one for Sauvie Island and the emergency email system has worked very well. I would be very grateful if you would mention all this in the Rural Watch Newsline.  I would also be more than happy to write a monthly entry in the Rural Watch Newsline to include a monthly police blotter for your community.

I was raised in Multnomah County and have lived here for most of my life (30 of the last 41 years). I am married to my beautiful wife of 20 years, Erika and together we have three gorgeous teenaged daughters Joy, Emma and Elizabeth (Ellie).

While I worked at Troutdale Police Department, I served two years on the East Metro Gang Enforcement Team, I served six months as an acting Patrol Sergeant and I was assigned as a Detective to the investigations division and the East County Major Crimes Team for one and a half years.

I am a certified instructor in defensive tactics and active shooter/threat response. I have attended the Metro Area Sergeants Academy as well as the Portland Metro Detectives Academy.

In April of 2015, I was awarded the Medal of Valor along with 16 other officers and deputies, for our response to the Reynolds High School shooting on 06/10/2014. I wear the Valor pin on my vest not as a reminder of our actions but in memory of the lives and innocence lost that day.

On June 30th, 2015, I was sworn in as a Multnomah County Sheriff’s Deputy alongside my fellow Troutdale Police Department members. It was a long awaited day and I am so proud to belong to this office.