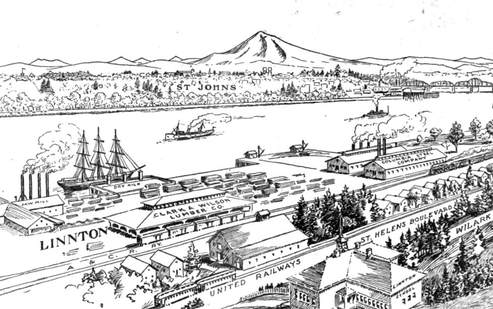 Linnton is a hardscrabble little town which has survived decades of grand expectations and dashed hopes, explosive growth and financial calamities. It's amazing how much history was created in this one and a half by seven-mile strip of land crammed in between the Tualatin hills and the Willamette river. This story is about bizarre events in Linnton in the early twentieth century that influenced a major change in Oregon State law.

After the election of 1832, President Andrew Jackson dissolved the central federal bank and transferred all of its' treasury assets to chosen state-run banks. This led to wildcat banking, land speculation, and the circulation of paper money issued by each individual bank. When New York banks suspended payments in gold in May of 1837, another 800 banks followed, causing 618 banks to fail by the end of that year. This triggered a massive Depression. Over 39,000 Americans went bankrupt, losing some $741 million ($17,848,495,260 in today's dollars) as the Panic of 1837 reduced many to starvation.

Affected by this crisis were two adventurous gentlemen, one from Missouri; the other from Iowa. They would meet May 22, 1843 as members of the largest wagon train (over 800 people and 120 wagons) to attempt the Oregon Trail.

Peter H. Burnett, a lawyer and prosecuting attorney from Liberty Missouri, was one of the Captains of the train. Trying to deal with his wife's serious illness, and hoping to escape overwhelming debt, he was influenced by Missouri Senator Lewis Linn's ongoing efforts to pass the "Oregon Bill" in Congress that would reward those willing to transplant into the Oregon Territory with free land claims of 640 acres each, once they had arrived. Although the bill passed in the Senate, it was narrowly defeated in the house in 1843; but still, it's close call inspired thousands to embark on the difficult Westward journey with hopes it would pass the following year. In reality, it didn't pass until 1850 as the Donation Land Claim Act.

Morton M. McCarver, a restless land developer, had plated Burlington, the first territorial capitol of Iowa. As a result of the Depression, he was more than $10,000 in debt, and looking for quick ways to satisfy his creditors. He saw great promise in the Oregon territory, leaving his family in Iowa to join "The Great Migration". He was named one of the council of nine men who were to have general charge of the Oregon wagon train.

The two men laid plans to found a town in the Oregon Territory at the head of navigation of the Willamette River. (head of navigation is the farthest point above the mouth of a river that can be navigated by ships). They knew of the rich land of the Tualatin valley and the thousands of bushels of wheat that could find their way onto ships at the docks in their bustling new town.

Their choice for a site was a former Hudson's Bay company landing along the Willamette river, about six miles downriver from Portland. They were encouraged by the location of a cattle trail there that led into the Tualatin Valley. Why, they only needed to improve it a little to make it wagon-friendly and the wheat would come flowing into warehouses soon to be built. McCarver wrote that their town, named after Senator Linn, would be one of the greatest cities in America, limited only by the scarcity of nails with which to build all of the buildings that he visualized.

Alas, things were not to be so. The "Road to Linton", so named by surveyors in 1852, was much harder to improve than expected. Myriad amounts of timber and brush had to be removed, leaving only a narrow, steep, and muddied trail that a loaded wagon could barely negotiate.

The bigger problem, of course, was that Linnton wasn't at the head of navigation; Portland was. Linnton had a chance though, until the "Canyon Road" was laid out in 1848, making the trip to town and docks in Portland much easier than that to Linnton.. Also, a little town at Baker's Landing, up the river about one mile closer to Portland (to later be called Springville) had constructed a better road over the Tualatin mountains than Linnton could offer. Springville road is still evident today, although interrupted by Forest Park (Linton road is not!). Comstock and Company, after purchasing Baker's Landing, built a 5000 square foot two story warehouse there to store grain from the Tualatin valley, enabling one firm to ship over 100,000 bushels of wheat from Springville in a single season. Linnton perhaps benefited when Springville burned down to the water's edge in 1872 and became lost to history.

Nevertheless, the two entrepreneurs laid out the plat map of Linnton and sold the lots for a minor loss after paying their road and building expenses. They were both living elsewhere by 1848. A ship's captain heading up the Willamette that year wrote in his journal that the town looked deserted.

Our two pioneers were to meet again in California, where they both had sought fortune in the gold fields. But McCarver still had his obsession with founding townsites, and made an agreement with John Sutter and his son to organize the plating and sale of lots on their land which would later become Sacramento, California. Once Morton's partner in the Linnton enterprise, Burnett became his nemesis in this endeavor. Peter befriended Sutter's son, managing to steal the job as director of the project from McCarver, cheating him out of $100,000 in fees and profits. McCarver never forgave him.

Both men were still destined to make their mark in West Coast history, however, McCarver as the founder of Tacoma Washington, and Burnett as the first governor of California.