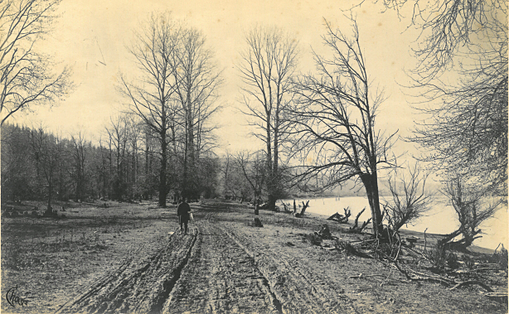 The original Linnton Road (Highway 30) before 1900 (Photo: Ore. Hist. Soc.)
By Patrick Ahern and Theresa Thorud
Last of the series

Outrage!
As we have mentioned before, Portland was hosting the Livestock Exposition and the Shriners convention, filling the city with prominent businessmen and public officials on the night Jasper Newton Burgess, State Highway commissioner, and George E. Perringer, Pendleton cattleman, were gunned down in front of their lady companions and their friend E.P. Marshall while dining in a private room at the Claremont Tavern. Before the floors had a chance to soak up the blood of the two dead men, several of these conventioneers had made their way to the roadhouse even before the coroner had arrived at the scene. Gray haired men, tears streaking their cheeks, flailed about demanding explanations and justice for their friends.

Claremont Tavern stood silent witness as the other victims of the robbery scattered before the police arrived, not wanting to answer any questions about their presence at this questionable nightspot. I'm certain it was the last time they ever darkened it's doorway.

Their sudden departure contributed to the fact that there was never a complete accounting of the total monetary losses incurred. The three women were spirited away back to Portland in Olaf Olson's taxi, who was also a victim of the robbery.

E.P. Marshall, in a state of shock, was hardly in a position to be questioned, obviously overcome by the emotion of the events and the fact that he himself had organized the small dinner party, causing the death of his friends. The bullet meant for him missed, but the event left him scarred for life.

News traveled fast. Friends of the Pendleton ranchers arrived even before the medical examiner could remove the bodies, devastated by the bloody death of their friends. Several grey-haired men, tears streaking their cheeks, flailed about demanding explanations and justice. E.P. Marshall, well aware that it was his invitation to the evenings events that caused Jasper and George to lose their lives, and having almost been killed himself, was so overcome with emotion that he couldn't even talk to detectives until the next day. Olaf Olson drove the ladies home; hopefully for free. Just imagine the stories they had to tell. The other victims of the robbery scattered before the police arrived, not wanting to answer any questions about their presence at this questionable roadhouse. This is probably the reason there was never a complete accounting of the total monetary losses incurred.

All night long, the entire police and detective force of the city scoured the neighborhood and cast a dragnet over every possible avenue of escape. Sheriff Til Taylor, a friend of both Pendleton victims, was also in town at the cattlemen's convention, and immediately joined in the search for the bandits. In just 24 hours, an aggregated reward fund topped $18,500 ($257,300), the highest reward ever offered in Oregon for a murder suspect.

The next day's papers also started the clamor for a return of the death penalty to prevent crimes such as this. Mayor Baker instructed City Attorney LaRoche to craft an amendment to the state constitution to re-instate the death penalty in capital murder cases. Signatures for the petition to be included in the next general election were to be gathered immediately. On Nov. 22, the board of managers of the Pendleton Commercial Association passed resolutions demanding the return of the death penalty for murder, as did several other state-wide organizations. The resolution passed the following November, and remains in force today.

Downfall Destined
As the three scallywags scurried across the river in their stolen rowboat and headed for their hideout, little did they realize that their caper was doomed from the beginning. An informant, under the alias of John Doe, was telling Portland inspectors Phillips and Tackberry and Sheriff Taylor that the perpetrators could be found at 163 W. Emerson, a small house that was becoming a "crime colony" in Portland. The house had been leased by one Vincent Murphy to run a soft drink establishment, with a couple of stills in the basement, of course. The cops loaded up two cars with 8 detectives and headed for Emerson street. Taylor and detectives Leonard and Phillips hustled up the walkway and rang the doorbell, while the others surrounded the house. Mrs. Murphy answered the door, showing no surprise at the intrusion. She continued along with her housework as the men searched the home while her 6 year-old son and two puppies observed. Inspector Philips opened the door to a back bedroom, finding the desperados, and immediately pulled his revolver from his overcoat pocket.  Pointing the weapon at the three men, he shouted: "The jig's up, boys. Sit down." Just like in the movies!

It turns out that the mysterious informant, John Doe, was no one other than Blackie Williford, the co-conspirator who got into an argument with the boys when he dropped them off at the ferry terminal the night of the robbery, and bailed out of the caper. Good decision on his part, since his share of the reward money ($62,000 in today's dollars) was much greater than all three realized after the robbery.

Well, James Ogle sang like a canary! He pictured himself as an unwilling participant, being forced to partake in the robbery against his will, and blaming Bannister for the shooting itself. Years later, amidst other confessions, it's still not completely clear who fired the shots. That seemed to be their intention.

The evidence piled up quickly. In addition to the money and jewelry from the heist being spread out on the bed of the Emerson street hideout, several weapons were confiscated, including the one removed from Patrolman Case during the robbery. When they searched Ogle's pockets during the arrest, they found a distinctive stick pin (three monkey heads) that had been used to close one of the robber’s lapels as part of their sophisticated disguise. (a white handkerchief tied over their face). One of the lady victims was able to identify it. Additionally, at the time of capture, in one of the greatest examples of bad timing ever, a delivery boy from a Union avenue tailor shop returned two suits to the house that had been dropped off for cleaning; one was so dirty it could not be cleaned. The arresting detectives found drops of blood on that suit, and mud stains that matched the clods of mud left on the seat of the rowboat used in the escape. Shoes in the house were covered with clay like that on the riverbank where they tied up the boat. Yes boys, the jig was up.

Justice was swift in those days. The crime transpired on Friday. The perpetrators were caught Saturday. the inquest was Monday night. On Wednesday, the boys all pled guilty in court to the murder charges. The presiding Judge Gatens remarked they were lucky that capitol punishment had been rescinded, or they would be swinging from the gallows. On Thursday they began serving life sentences at the state prison in Salem.

In an ironic twist of fate, Sheriff Til Taylor was killed during a jail escape one year later. The swift hand of justice promptly took advantage of the new death penalty, and a noose was placed around the neck of the escaped prisoner, who never had the opportunity to break free again.

End of the Road
You might ask if justice was served? Well yes, to some extent.

As one might suspect, the boys were not model prisoners. James Ogle had a reputation for shooting (his mouth off) and had been consistently verbally abusive to guard John Davidson. On March 20, 1920, Ogle found a rock the size of a baseball in the exercise yard, and hurled it at Davidson's head, just missing him. When he reached for another rock, Davidson shot and killed him. Ogle had recently confessed to the warden that he was the one who did the shooting at the Claremont, so I guess one could deduce that justice was indeed served, without even having an official death penalty judgment.

David Smith didn't fare much better. He fell sick with the influenza pandemic that swept the globe, killing 50 million people worldwide, including a special one in the Oregon State Penitentiary. Strange though, in examination of the body, it was discovered that his tongue had been mysteriously pushed or drawn into his throat, in effect strangling him.

And Walter Bannister? It's hard to imagine the level of political and criminal corruption this fair city has hidden in its past, but somehow, the new governor Julius Meier (of the Meier and Frank family), decided to PARDON the last remaining Claremont bandit on March 28, 1933. There are reports that Meier was deeply involved in the payoff scandals that flourished during the years of prohibition, but his favorable treatment of Bannister is still a mystery.

Of course, Bannister had learned his lesson during his years of confinement, and after his release, followed a straight and narrow path directly to Olympia, where he established a resort called "The Wigwam", where he planned and executed robberies and a "murder for hire" operation. No justice here, thanks to Meier.
And what about the Claremont Tavern itself? It's days of grandeur were over now, and instead of being the darling of the motor crowd, it fell into a state of notoriety, and after a few months of visits from curiosity seekers, became a victim of the other speakeasies located in Portland.

In less than two years after the robbery, on May 26, 1921, an advertisement appeared in the Morning Oregonian offering "the fine summer resort on Linnton Road" for sale for $20,000 ($279,287 today). There was no mention of its new neighbor, the Portland Gas and Coke company, with it's 16 stacks belching smoke from the burning of oil to make electricity. I'm sure it was still a wonderful place to sit on the veranda, sipping a frosty beer and listening to the unrelenting din of the four sawmills and two veneer plants surrounding it.
​
Apparently that bargain price did not attract any astute investors, and the Claremont Tavern disappeared from the pages of history, unable to survive the building of the St. Johns bridge in 1929.

Sweeping up the Sawdust
Linnton itself didn't seem to miss the establishment, since these were its boom times, which lasted until the Great Depression of 1929. Its 10 years of duration strangled the bustling Linnton industries, and Linnton never fully recovered those heyday years. The Linnton road, when it became highway 30, ripped much of the soul out of the city. Those who remain are loyal to the town, and quite active in remaking its image from a mill town into a sustaining village.

You might notice the old East West lumber mill site (Linnton Plywood) has undergone a transformation as preparations are being made by Restorcap to restore the mill site into wildlife habitat. Linnton creek, which has been hidden in a culvert, will once again bubble across the land that tried to cover it, restoring its original flow into the Willamette. A park-like setting will enable river access previously restricted by private property prohibitions. There couldn't be a more appropriate place for a celebration of a return to nature, a major victory for Linnton residents.

The photo shows the original Linnton Road (Highway 30) taken before the turn of the 20th century. I'm certain the Linnton citizens had no way to visualize what would transpire there in the passage of these one hundred years; in the same way, we don't really know what will evolve in the next one hundred. We can only hope for the best for this little town.