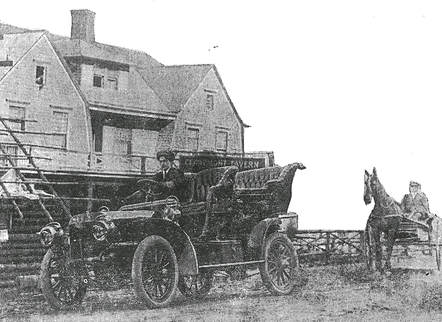 Carriages both with & without horse brought patrons to the Claremont Tavern (Photo: Ore. Historical Soc.)
By Patrick Ahern and Theresa Thorud

I would have been a patron of the Claremont...

It's easy to imagine myself sitting on one of the large verandas, with mountains and a river in my view, nursing a cold mug of Henry's. It's also easy to imagine a row of sawmill workers standing along the bar washing the sawdust out of their throats and delaying, as long as possible, their eventual return home. I can also envision a couple of men at the end of the bar, lacking the evidence of an honest day's work, watching motorcars, one after the other, disgorging rich and privileged scions of the Portland elite into the private dining rooms of the Tavern.

Situated at the end of the improved Linnton road, the Claremont Tavern became the haunt of the Portland Automobile club, receiving the belching beasts one after another to the consternation of those arriving by horse drawn carriage. Many of the "horseless carriages" made it safely along the twisty road; several veered off and tumbled down the steep grade that paralleled the Willamette river. The 17 daily trains to Linnton stopped there, and customers also arrived by boat and the St. Johns Ferry. Its landing was a stone's throw from the Claremont, between what is now Transloader International and Advanced American Construction (the ramp is still visible), and the ferry itself was referred to as the St. John's/Claremont Ferry. It must have been quite a lively place.

But, as I mentioned to my wife upon completion of our new home, "This is the best it will ever look.” Time is relentless, and as the years ensued, the Claremont was destined for harder times. Some previous issues with serving alcohol to underage ladies and offering libations on Sundays (forbidden) had been resolved with a wink or two, but the large scale drinking allowed at several of Portland's roadhouses culminated in July of 1912  into a confrontation with governor Oswald West accompanied by a detachment of militia of the national guard. He held an order of martial law against the Tavern (and other roadhouses) that he threatened to post on the door unless the proprietors, Frank Leith and Charles Anderson, would sign a written agreement to operate the business in a lawful manner. Of course they quickly agreed, but continued to ignore the restrictions imposed.

Then came the biggest obstacle. Women's suffrage had been resisted for years in Oregon, as many men, especially in the entertainment business, held a suspicion that once women had the vote, the next thing would be Temperance and a war against alcohol. Women achieved suffrage in Oregon on November 1912; in 1914 Oregon outlawed alcohol (National prohibition didn't arrive until 1919). You would think the Temperance Movement might have been an insurmountable obstacle for a tavern, but all prohibition did was enable a bigger, more prosperous underworld. A retired Portland vice cop, Floyd Marsh, wrote about those times in Portland. Marsh remembered at least 100 speakeasies, 40 gambling dens, and a monthly bribe total of $100,000 (about $1.4 million today) earmarked for the county and city authorities. The purported Oregon alcohol-free morality was just a sham.

Business did suffer some, however, as the more law abiding citizens stayed at home, and two competing taverns in the area, "The Hut" and  the "Lakeview Tavern" drew away part of the illegal moonshine trade. In order to re-create some of their lost income, the Claremont, for a brief time, was converted into a home for shipbuilders from Columbia Engineering Works in 1918. The ending of the war soon after returned the Tavern to it's original use, and business became resurgent as Linnton reached it's peak employment heyday.

That was good news for the Claremont Tavern, until a horrific event occurred there in November of 1919 that so incensed the entire state that a major change to the constitution evolved as a result: the reinstatement of the death penalty that had been repealed only 6 years prior. It also marked the beginning of the end of the Claremont.

Authors Note: My research partner, Theresa, warns me that the newspapers of the time were under the influence of the Hearst publications and were subject to a little hyperbole around the facts. She suggests taking their accounts with a grain or two of salt, but hey, where's the fun in that? Also, When I mention dollar amounts, I include the 2018 adjustments for inflation in parenthesis.

Desperados
November 21st, 1919 was a dark and stormy night (of course it was, it was November). A large black sedan pulled into the Jones Lumber Company of St. Johns, killing it's engine as it arrived. An argument ensued between the occupants; shortly after, three men dressed in suits left the vehicle. A fourth man remained behind, one Blackie Williford. We'll get back to him later.  The other men included one Walter Banaster, alias "Little Dutch Herman,” 23 years old and an unemployed cook;  James Ogle, a horse thief, ex convict, and recent resident of the Deer Lodge, Montana penitentiary; and David Smith, a machinist, also 23 years old. They made their way to the east side of the St. John's Ferry, catching the last sailing of the evening at 10:30, making their way west across the Willamette river quickly in the blackness of the sky and water. They arrived on the opposite bank of the river in the shadow of the Claremont Tavern, the well-known playground of the Portland moneyed elite. They weren't there to play, however.

The Doomed and The Damsels
Meanwhile, back in Portland, the annual Shriner's convention and the International Livestock Exposition had both finished their daily activities, and the gentlemen attendees were looking for a little nighttime distraction, as many convention participants do. A Pendleton businessman, E.P. Marshall, recently widowed, connected with a young female desk clerk at the Benson hotel, Lora Hastings, whom he had known previously when she was still living in their hometown. A night at the theatre was to be capped off with an "automobile party" and an evening drive along the Linnton Road to the Claremont Tavern. On the spur of the moment, he invited his friends Jasper  N. Burgess and George E. Peringer to join them, along with Lora's two roommates from the Baron apartments, Miss Elsie Babcock and Miss Jane Shelton.  Burgess, 46 years old and a native of the Dalles, was the owner of vast holdings of wheat and grazing land and large flocks of sheep. He was prominent in public life, and had been mentioned as a future gubernatorial candidate. In 1910 he was elected state senator. Obviously a very important man in the elite of Eastern Oregon. His wife did not attend the convention as she was visiting her mother in California. George E. Peringer was reputed to be the largest land owner in Umatilla county. He was a great horse fancier, and took an active interest in stock shows and the Pendleton Round Up when it was organized. His wife had remained in Pendleton. The group rounded up an automobile and headed out of town on what was to be a grand adventure. At first.

Dastardly Deeds
The three prowlers, after leaving the Ferry, scoured the riverbank and absconded with a rowboat belonging to one J. Redding who lived near the west ferry terminal, caching it to use in their planned escape back across the river. At about 11:00 pm, Mr. B.J. McCauley, a former co-manager of the Claremont, was sitting in the reception area when he noted the entrance of three men dressed in blue serge suits dappled with globs of mud and wearing white handkerchiefs tied over their faces to disguise themselves. Somewhat amused at their appearance, he did not consider them seriously when they told him to "throw up your hands". It didn't take too much to convince him they meant business, and following their instructions, he was escorted to the ballroom with the other patrons. He was wearing an expensive ring worth  $1650 ($22,345) and carrying $500 ($6700) in cash...but not for long. One of the robbers stayed with the patrons in the ballroom, relieving them of their valuables, while the other two split up to comb the premises for other opportunities. A killer headed for the private dining rooms.

Our three conventioneers had been seated in one of those rooms, surely an exciting adventure for the young women, being entertained by some of the Pendleton elite. They had just been served an appetizer of carrots and celery when they were served an entree they were certainly not expecting. A short, brutish looking young man dressed in a blue suit with a white kerchief  wrapped around his lower face burst through the door waving two pistols and demanding everyone vacate the room and follow him to the ballroom, or he would shoot them. Mr. Burgess demanded to know what  the man's intentions were, and when the gunman replied with an additional threat, Burgess, thinking it was a joke being played upon him by his fellow Shriners for being out to dinner with a bevy of young women when his wife was out of town, decided to bluff the desperado, telling him to just go ahead and shoot!

Once in the face, once in the heart, and a few more times for good measure.

George Perringer then leaped into action, attempting to slam the door of the dining room in the face of the killer. His bravery was answered with a shot through the door jamb into the heart. Staggering out into the hallway, Mr. Perringer collapsed in full view of the holdup victims, his lifeless body effectively preventing any further resistance.

Mr. Marshall twisted away from a bullet sent in his direction, and immediately became compliant with any additional demands of the robbers, having seen his two friends lying in pools of blood and Miss Hastings unconscious, fainting during the gunfire. She was attended to by the other women, and the depleted party was then marched into the ballroom to be lined up along with the other 25 people in the establishment. As the robbers removed their money and jewelry, it became clear that this holdup was carefully planned. People of means during that era, perhaps because of a lack of trust of the banks, carried large amounts of cash. Two diners were each carrying $6000 in today's currency.

The gang was calm and businesslike. Banaster, also disguised, went downstairs in search of the Tavern manager and the combination to the establishment's safe. Once in the basement, he received a surprise equal to the surprise he gave to a uniformed motorcycle cop who had stopped in on his rounds, having seen the three men enter, and dropped into the kitchen to investigate. Relieving the officer of his gun and club, he gathered him along with the cook Charles Jackson, and the waiter John Moyer, who had just dropped a tray of food in panic, and sent them upstairs to the ballroom to join the others.
He confronted the manager of the Claremont in the basement, Miles Coakley, who thought he was being played about opening up the safe until the barrel of a gun was jammed into his ribs. The "box" yielded about $400 ($5400), a pretty good haul so far, adding in Coakley's personal jewelry.

The boys didn't seem to be in much of a hurry, despite the gunshots and gendarme in the basement, taking their time as they relieved the patrons of their valuables. They even went outside and strong-armed Portland Taxicab driver Olaf Olson into the ballroom. He had been looking in the windows, attracted by the gunshots, and smartly had hidden his money in the cab. Half an hour later, the robbers made their escape toward the stolen rowboat and the Willamette, probably congratulating themselves for a successful caper. Little did they know that all hell was going to break loose, and the seeds of their capture had already been sowed.