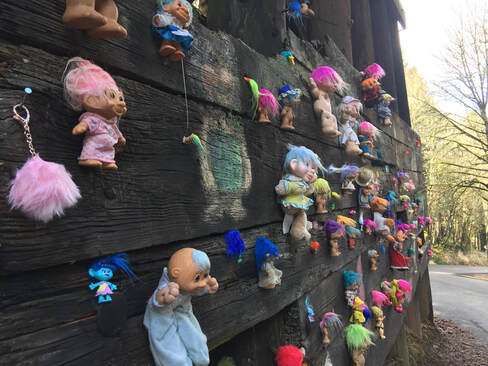 One hundred years after a wooden trestle first spanned a canyon and logging road, the trolls began to emerge. First there were a few, then word spread, and many others came to live at the trestle in the forest. Some even died there. Today the thriving troll community has achieved the ultimate in fame: a vibrant social media presence.

This is the story of the McNamee Trolls. Names have been withheld to protect the privacy of those present when the trolls first emerged.

In 1907, United Railways began work on a line west from Portland. Where the tracks climbed the face of the Tualatin Mountains, trestles were built to span forested canyons. The McNamee trestle was built in that era, when McNamee was a corduroy road: logs laid side-by-side to provide a stable roadbed. Today that old logging road is paved and lined with homes. In one of them, a family lived. In the early 2000s, they drove under the trestle nearly every day.

Here’s what one of the children remembers:
“Whenever we would go through the train trestle, we would stop the car for a moment to ‘greet’ the imaginary troll that we thought must live in the structure.”
The mom had an idea. She ordered a box of used trolls from eBay, rescuing them from the oblivion of someone’s basement. After they arrived, and without telling her children, she drove in darkest night to the trestle and nailed each troll to it, right through its fat troll belly.

The next day, when she stopped the car under the trestle, her children were thrilled.

“When my mother put up the first few trolls, it was just as an inside joke,” the now adult child remembers. “Then, someone put up a goat. Soon after, someone painted trolls on the trestle, and the troll bridge was officially a work of community art.”

The former child acknowledges, “Not everyone liked the troll bridge. Some people in the community thought it was graffiti but we always loved it.” (Hence the anonymity, plus it’s a mild act of vandalism of private property.)

“Trolls would get pried off and new trolls put on the bridge: some from our family and most from others. Now, every time I visit, I make sure to pass the troll bridge to see what the new additions are. I think of it as a good example of the Portland guerilla art scene.”
​
Today the website Atlas Obscura has a page dedicated to the “Portland Troll Bridge.” (https://www.atlasobscura.com/places/portland-troll-bridge). Other sites feature photos and comments from tourists and locals who come to see it, add trolls, and take selfies. The trestle is owned by Portland and Western Railroad. It did not respond to a request for comment for this article. And p.s.: The author is not the mother in the story!