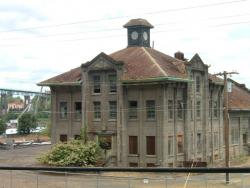 Taking my historical research into my own hands, I drove directly to 7900 NW St. Helens Road, stopping at the large gate and attendant guardhouse. Once the guard had finished my strip search and verified that I was not carrying more than four ounces of any liquid in a plastic baggie, he kindly informed me that my curiosity could probably be satisfied by a telephone call to Northwest Natural Gas. Once I had convinced the operator that I did NOT smell a rotten egg odor (at least at THAT moment), I was eventually routed to Mr. Ross Lisle, a self-described humble engineer with a love for Portland history.

Ross immediately knew which building I was researching, as it had also been of interest to him. He generously provided a picture and a synopsis of its history.

As any husband can tell you, the production of gas has been a necessary and important function of society from history’s origins. In Portland, at the end of the 19th century, gas lighting was provided to Portland streetlights by the Portland Gas Light Co., owned by Henry Green and H.C. Leonard.

The company made its gas by carbonizing coal that arrived in Portland as ballast aboard windjammers. This coal was unloaded at the company’s dock and carried by wheelbarrow to the nearby gas plant. In 1892, Charles F. Adams, A.L. Mills and other businessmen bought the Portland Gas Light Co., tied two plants together with a pipeline that went under the Willamette River, and changed the company’s name to Portland Gas Co.

California oil became cheaper than coal; so, in 1906, the company began a plant changeover. In 1913, the re-named Portland Gas & Coke built its third and last gas manufacturing plant in Linnton, where it made gas from oil, not coal. It was during this expansion that our building found life. “Gasco,” as the company became known, considered several types of architecture, wanting to construct an office building that would convey the impression of solidity, permanence and dignity both to their investors and the citizens of the community: “The main buildings are of reinforced concrete, containing 1 inch sized crushed rock, which has been bush hammered on the exterior to produce the effect of granite…. The roofs are of terra-cotta colored shingles, laid on the French diagonal method. Streets and driveways are provided with curbs, sidewalks, sewer connections, etc., and are illuminated with gas arc lamp posts.”

This must have been an impressive building for its time. The faux granite exterior, copper-trimmed windows and gutters, French diagonal shingles, and brightly stripped awnings must have attracted much attention from commuters on St. Helen’s Road. Still attracting attention, although for different reasons, the building at 7900 faces a rather grim future. Although it survived the deconstruction of the rest of the gas manufacturing plant after its closure in 1956, it sits on property subjected to the sins of our fathers who were ignorant of, or chose to overlook, the science around the disposal of manufacturing wastes. By-products were pumped directly into the Willamette until 1925; thereafter stored in pits on the property which were eventually covered by fill. Northwest Natural Gas Co. signed up for the Oregon DEQ’s Voluntary Cleanup Program in December of 1993, and continues to address problems on the site.
RR1007