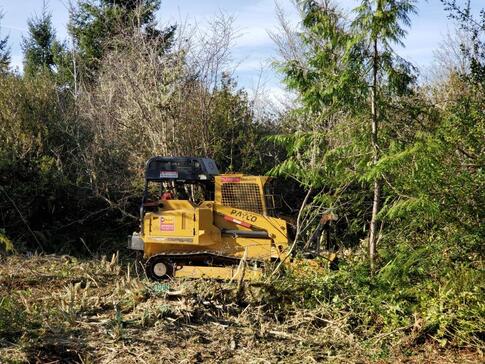 In a blue-sky week in early November, a Rayco track mulcher began chewing up mature holly trees in a 13-acre orchard on McNamee Road. With the last commercial harvest from the orchard almost 10 years prior, the property owner, Dr. Ivan Law, had decided to repurpose his land. “I had been thinking of clearing it out for a while,” Law said.

He found a partner for the job in the West Multnomah Soil and Water Conservation District (WMSWCD). Michael Ahr, Forest Conservationist at WMSWCD, explains how the process worked for Dr. Law, and how other landowners can work with the District on projects to improve their land’s value and wildlife habitat, and to improve regional water quality.

14 months in the planning
When Law contacted the District in September 2018, Ahr and his team jumped into action. Holly is an invasive species, and not the highest economic use for Oregon forestlands. The first step was to survey the property and create a management/conservation plan, based on the owner’s priorities. In this case, the plan recommended holly removal (along with 4 acres of blackberry) and replanting with either timber or pollinator species, in accordance with Law’s goals for his land.

Once a conservation plan is in place for a property, federal funds can be accessed. In this case, Law applied for a Natural Resources Conservation Service (NRCS) grant. Ahr, who is certified to write NRCS conservation plans, helped with technical details.

Requests for proposals went out in late winter 2019. Ahr didn’t specify in the RFP how the holly should be removed, but did require it either be hauled offsite or chipped. After reviewing six bids, Ahr awarded the contract to Hillsboro-based V & K Construction, owned by father-son team Vernon and Kerry Nussbaumer. They also did recent grading work at the Skyline Grange.

Instead of cutting and hauling, Kerry Nussbaumer chose a track mulcher, which chews up a tree from the top down and spits out material fine enough to replant in. The finer material leaves nutrients in place and decomposes faster, resulting in less debris that could fuel a forest fire. The mulcher also eliminates the carbon impact of scores of truckloads of debris being hauled offsite.

As the mulcher began chewing through the orchard, one happy surprise was revealed: many thriving alder, Douglas fir and cedar that had volunteered and grown hidden for decades. Nussbaumer deftly maneuvered the mulcher around the trees, saving them, and giving Law an unexpected head start on reforesting his land. “These guys are very professional,” Law said, as the tree-clearing work proceeded into mid-November.

“Weed pressure” as Ahr calls it, is always a problem after invasive species are removed and before new plantings mature. Carefully targeted use of herbicides is often the most effective treatment for certain invasive species. In some cases one spraying is not enough. For Law’s site, emerging weeds (and any holly that resprouts from stumps and the seed bank) will be sprayed only as needed over the next five years. Replanting in February 2021 will likely be in a Douglas fir mix, because fir grows fast and gets above the weeds, shading them out.

WMSWCD has funds to help Ridge landowners complete projects
Dr. Law’s land is some of the 14,000 acres held as nonindustrial private forests, or what Ahr calls family forests, in western Multnomah County. Of these, only 10 percent, or 1,400 acres, have a conservation or management plan in place. (Another 600 acres are currently in process of formulating a plan.) Along with giving landowners fascinating insights and details about their land from an experienced forester, the plans are the beginning point for accessing funds for forest, field or watershed improvement projects.

Skyline property owners have worked with WMSWCD to remove blackberry, holly, and ivy, and to plant pollinator and timber species. Other projects have been to repurpose Christmas tree farms. Projects are often multi-year, with stages for removal, spraying if required, replanting, and respraying as needed. The District provides expertise, buys plant material at costs below what a landowner would pay, hires contractors, and is a conduit for federal and state funds. Landowners contribute via their own labor on parts of the project, and sometimes with a cash outlay that represents a small part of the total financial costs. Most forest improvement projects, Ahr says, are in the $5,000 to $10,000 range.

Much of the acreage in Skyline family forests was last commercially logged in the 1980s or 1990s, before timber companies sold the land to be developed. “Our wheelhouse is to work with landowners whose trees were planted in the 1990s,” Ahr says. “You might have 200 to 300 quality trees per acre, but they’re not thriving because of competition from shrubs and less desirable trees like bitter cherry or maple.” Many of those acres need thinning. The District can help with costs and logistics to make a forest more productive, if harvest is the goal.

Most WMSWCD projects are much smaller than Dr. Law’s orchard replanting.  For example, Ahr says that for many properties, the transition zone between forest and residential areas is filled with non-native Himalayan blackberry. Removing it and replanting with pollinator species such as snowberry and currant is a small, easy-to-implement improvement that enhances property aesthetics and value, and creates good habitat for wildlife.

Don’t wait until spring!
If you have a project for your land, and want to access WMSWCD’s expertise and funding, don’t wait until next spring. Developing a plan and applying for available funds takes time. Ahr says, “Now is a great time to contact us.”

Laura O. Foster is the author of eight Oregon guidebooks and has worked with WMSWCD on conservation projects on her own property.
​(RR 01/20)