Help Save the City of Roses from Japanese Beetle 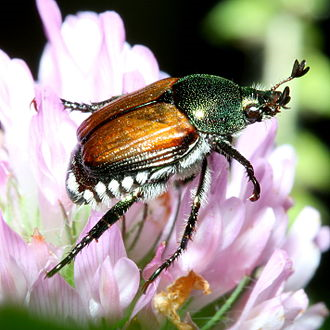 There is an old saying amongst Japanese beetles (Popillia japonica) – “Never be too busy that you don’t stop to eat the roses.”  Yes, Portland’s iconic City of Roses faces a new threat from an old invasive fiend as the Oregon Department of Agriculture found 369 beetles in traps in the NW Thompson and NW 143rd Avenue area of the Tualatin Mountains.  Other adult beetles were also caught on Swan Island (1 beetle) and around the Portland International Airport (3 beetles).  These 2016 detections follow earlier detections – all of which were successfully controlled -- such as Tigard and Cave Junction in the late 1980’s and periodic Port of Portland detections since 2000.  Unfortunately, the 2016 detections are unprecedented in the number of beetles caught, suggesting a breeding population has been established.

The adult Japanese beetle is a large (about a half to two-thirds of an inch), metallic brown beetle, with a metallic dark green head; its most distinctive marks are rows of five white spots along both edges of its abdomen as well as two larger white spots at the tip of the abdomen.  Japanese beetle adults are active flyers and frequently fly short distances between plants. Juvenile larvae, called grubs, live underground and easily hitchhike to new locations via shipments of plant material containing roots and soil.  Adult beetles may find a ride in planes, trains, or automobiles.  Adults breed and lay eggs in late summer.  Eggs hatch into the caterpillar like grubs which overwinter and pupate into adult beetles, which emerge in May and June.  Active throughout the summer, the adult beetles need moist, cool conditions to successfully breed; like those found in summer irrigated gardens and landscapes.

The Japanese beetle can cause serious damage to nurseries, seedbeds, orchards, field crops, landscape plants, and garden plants – over 200 plant species in all.  The adults chew up leaves, flowers and foliage – leaving only skeletons – and devour fruits. Trees and shrubs with extensive feeding damage turn brown and ugly.  Japanese beetle grubs primarily feed on roots of turf and ornamentals, but will also feed on roots of garden and crops such as corn, beans, tomatoes, and strawberries.  Dense populations can kill large areas of turf grass and the beetle is the single most devastating turfgrass pest in parks, golf courses, and cemeteries.

Japanese beetle – which indeed is a native species in Japan -- is a major invasive plant pest throughout the eastern half of the United States – first established a 100 years ago in Riverton, New Jersey.  Oregon, along with other western states, is still rated as Category 1 state under the national plan for regulating Japanese beetle – meaning that the Japanese beetle is not known to be established in Oregon, but faces the risk of entry via artificial means.  Maintaining Oregon’s Category 1 status is important to protecting Oregon’s important agricultural, plant and nursery industries from quarantine regulations.  But, Category 1 also means there are no established populations threatening roses, blueberries, gardens, and lawns found in neighborhood parks.  Keeping the Japanese beetle out of Oregon also prevents increased pressure to use pesticides by homeowners, farmers, landscapers and nurseries to control this significant pest.

Fortunately, the Oregon Department of Agriculture has an early detection, rapid response program in place to eradicate new Japanese beetle entries such as the population along NW Thompson and NW 143rd Avenue.  The Department routinely sets detection traps in a systematic grid that covers locations prime for new entries – such as the Port of Portland and surrounding metropolitan area.  When the traps catch Japanese beetles, the Department’s team of entomologists consults with technical experts from around the U.S. to decide next steps – usually in the form of intensified monitoring or trapping to understand the extent of the new introduction or in the form of an eradication treatment plan to kill all the beetles; or some combination.

​For the NW Thompson and NW 143rd population of Japanese beetles, the Department is proposing to eradicate the population with a treatment involving the use of pesticides as well as introducing natural enemies of the beetle through what is called biocontrol.  The proposal is for one ground application (in May 2017) of the granular pesticide Acelepryn®, which is a low-risk insecticide that targets the larval stage of the Japanese beetle.  It is applied to lawns and irrigated landscapes using hand held seed/fertilizer spreaders.  The granular pesticide is consumed by beetle larvae; so the goal is to ensure the pesticide is present in the soil and available for consumption so as to kill newly hatched larvae after eggs are laid in late summer, early fall 2017.  As such, a reduction or elimination of adult beetles will not be seen until the summer of 2018 and adult beetle presence in 2017 does not indicate an ineffective treatment.

The timetable and process for the Oregon Department of Agriculture’s final treatment decision is to hold affected neighborhood and community briefings in January 2017 with a more general public outreach meeting in February.  Technical workshops regarding the treatment plan will be held in March.  The goal is to conduct the final treatment plan (April-May) well in advance of egg laying and larvae emergence later in the summer and early fall.

Everyone with an interest can join the force battling the Japanese beetle.  First and foremost, keep an eye out for adult beetles next summer and report sightings through the Oregon Invasives Hotline -- either on-line at https://oregoninvasiveshotline.org/ -- or by calling 1-866-468-2337 (1-866-INVADER).  Include an address and a detailed description of exactly where on the property the sighting was made.  If reporting on-line (the preferred method), upload several good pictures – one a close-up, one more to provide context (i.e., the plant or substrate the beetle is on) and even one containing a more a broader view of the site.  This will allow a follow-up specialist to confirm the siting and provide sufficient information for them to visit the site.

For more information about the Japanese beetle – especially about upcoming meetings -- visit the Portland Japanese Beetle website at http://www.japanesebeetlepdx.info.