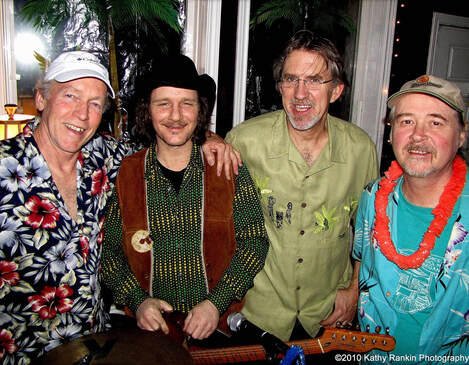 On October 13, 2018, The Freak Mountain Ramblers were inducted into the Oregon Music Hall of Fame. Quite an honor. That, and $2.50, will get you on the Max train. We donated the trophy to the Laurelthirst Public House, in NE Portland, where we played every Sunday evening for 19 years. We called it “Church”.

The road to the Freaks was a long one, it seems. I’ll try to keep it brief. I got my ticket out of New York City, where I grew up, by joining a band, The Holy Modal Rounders (Google that one) in the spring of ’71.  We hit the road. In the counter-culture community of far northern Vermont we ran into the Hog Farm commune. Wavy Gravy, et al. We became their “house band” and joined their caravan of buses. From Helsinki to Hollywood. In ’72 we traveled up and down the east coast, to Europe for the U.N. Environmental Conference in Stockholm. We played June at the protester’s camp at Skarpnack, then July in the outlaw community of Christiania in Copenhagen, then a month in Amsterdam.

Returning to the States, the band fired up the old ’52 Greyhound bus and landed in Portland. The “real” old Portland. The Holy Modal Rounders, fronted by Steve Weber, and our co-band, The Clamtones, fronted by Jeffrey Frederick. Jeffrey had left Vermont, fleeing warrants. The kicker for him was being in a New Hampshire jail, stamping license plates that proclaimed “Live Free or Die.” Despite his outlaw ways, Jeffery was an amazing musician who wrote beautiful, twisted, sad, and some funny songs.

We continued to travel from coast to coast, north to south, for 7 or 8 years. To the Comstock Lode in Nevada, the Cherokee “capitol” of Tahlequah in the Oklahoma Ozarks, etc. etc. But our home base was Portland, where we played places like the White Eagle and Euphoria (where we became friends with Mike and Brian McMenamin), in S.E., the Earth Tavern in N.W. and at Rock Creek Tavern. By the ’80s the Clams were playing regularly at Rock Creek. Matt and Katy ran the tavern with Lynn Conover running the kitchen. There were legendary, weekend-long, parking lot parties. I’d park my bus in the lot for weeks at a time.  Max Bullen was the morning bartender. The community on the Hill, with the cabins, trailers, horses, goats, wood spirits and aliens, seemed natural and became home.

The name Freak Mountain came from, I think, Bill Mahoney’s brother, Tim, who came to visit from Alaska, around 1980, give or take a couple years.  Bill ran the Mechanic’s Garage just down from Plainview store. After a week up here Tim declared it a G’dam freak mountain. The boundaries were loosely defined from Plainview, up Skyline to Lampa Land (Near Dixie Mt.) and down Rock Creek Road, to Rock Creek Tavern. Skyline was a narrow 2 laned, unimproved, and not very well maintained road, let alone the side roads. The only traffic congestion was farm and/or logging machinery or folks stopped in the middle of the road, chatting. After an ice storm, the power could be out for a week or more. It wasn’t a priority.

Lynnie Mae introduced me to Jimmy Boyer, shortly after his arrival to Portland around 1987. He fled Cleveland and landed on the Hill by way of Flagstaff AZ. He had a ’62 International Travelall and so did I. He was fixing it up and asked my advice on how to fix the power window in the tailgate. I told him you’ll never find another motor, so just stick a piece of 2X4 under the window when you want it shut, pull it out when ya wanna open it. Good thing. Jimmy put $600 bucks into that rig to get it all road worthy. About a week after it was legal, he drove it off Skyline. Coming up the Hill from Plainview, late at night, he failed to negotiate the turn and took out the Mile 13 marker. Rolled over the edge and down the Hill. Over and over. He wrote a song about it. I admired that. I still do. “The floor is the ceiling, the ceiling is the floor, the floor is the ceiling, the ceiling is the floor…”

We all became neighbors. He had a cabin we called “The Cosmic Playhouse.” There was always music, of all kinds, at all hours, playing there, a rotating cast of characters. Weber and Jeffrey would come hide out up here— for various reasons. They taught Jim a few things about the music biz and how to present himself; to dress up and not be ashamed to sing pretty. He learned a few guitar licks, but mostly what NOT to do. Don’t show up loaded to a gig. If you do (it happens) never apologize over the mike, trust your bandmates and make it part of the show! Jimmy had his own voice— wrote amazing songs, had a stage presence that one cannot teach, or learn.

I don’t usually play guitar, but Jimmy and I ended up with a regular Thursday Happy Hour gig at The Laurelthirst in the early ‘90s. Just trading songs. Jimmy wrote a buncha tunes, I knew a lot of songs from all the bands I had played in. Bingo, (Kevin Richey) was tending bar at the time. He decided that he was on the wrong side of the bar, because we could drink and play and he couldn’t. Soon he found a banjo and began playing with us. I switched back to bass. Eventually, Roger North, the drummer from the Rounders and Clams joined in and we became a band.

In 1999 we were recording our first record but we didn’t have a name.  Billy Kennedy, who lived on Beck Road, let us use Freak Mountain Ramblers, he was saving it for some future project, but gave it to us. The McMenamin Brothers took us on as a house band, playing their venues from Seattle to the Coast to Bend, etc., putting up with our indiscretions. We all played in various band arrangements: Golden Delicious; Jim Boyer Band; Lynn Conover Band; Bingo Band; the Freaks. We had a lot of fun, made a little money, made a lotta folks happy.

When Bingo moved to SoCal, we hired Turtle Vandemarr to play guitar. Lex Browning, the guitar and fiddle player from the Clams, showed up from Nashville and joined the Freaks.  We were mostly a Portland band, but our heart was on the Hill where Jimmy and I lived. The Freak Mountain Ramblers came to an end when Jimmy died in January of 2016. He played his last gig at Skyline Tavern with Lynnie.

Jim Boyer was inducted into Oregon Music Hall of Fame in 2017. He recorded six CD’s with the Ramblers and two of his own; Time Spent: 2003, and Trestle: 2011. (Editor’s note: Read a remembrance of Jimmy in the April 2016 Ridge Runner, http://www.srnpdx.org/remembering-jimmy-boyer.html).

Things will never be the same. It was fun.