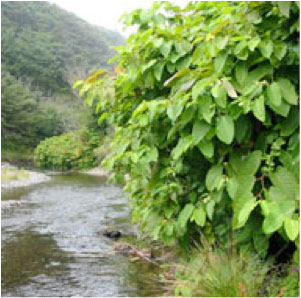 • Status: Classified as a "B-list" noxious weed by Oregon Department of Agriculture

• Threat: Grows very quickly, effectively shading out low-growing herbs and small shrubs. Forms monocultures in areas with disturbed soils, such as along roadways and stream banks.

• Description: The bamboo-like, hollow stems of this perennial herb arch from clumps up to lO feet tall. Alternate leaves are about 6 inches long and roughly heart-shaped, though with a flat base. Giant knotweed (Polygonum sachalinense) looks similar, but grows much larger: up to 12 feet tall with fully 'heart-shaped leaves averaging 12" long.

• History: Introduced as an ornamental plant to North America in the 19th century.

• How it spreads: Root fragments will readily re-sprout and stem fragments will take root under proper conditions . It rarely reproduces via seed. Hybridization between giant and Japanese knotweed produces a plant with characteristics of both species .

• Control: The latest and most promising control method for certified pesticide applicators is injection of the lower node of each stem with herbicide. Manual techniques which include repeated cutting of the stems (once every two weeks for up to two years), may be a successful treatment on small patches. These may be dug out, but repeated digging is necessary due to re-sprouting from extensive roots.

• Landscape alternatives: Ninebark is a native wetland shrub with attractive, peeling bark and clusters of white flowers in late spring .

Japanese Knotweed is making its presence known in the Skyline area. A mature population of it is growing along NW Elliott Road and Cornelius Pass Road near Highway 30. This native of eastern Asia spreads quickly to form dense thickets that exclude native vegetation and greatly alter natural ecosystems. It poses a significant threat to riparian areas and once established, it is extremely persistent. It tolerates a variety of conditions including full shade, high temperatures, high salinity and drought.

It is a member of the buckwheat family and is an upright shrub-like, herbaceous perennial that can grow to over ten feet high. Stems are smooth, stout and swollen at the joints where the leaf meets the stem. Leaf size varies, but are normally 6 inches long and 3-4 inches wide, and are broadly oval to somewhat triangular and pointed at the tip. In the late fall it dies back, but in the spring, new shoots spring out of the ground and grow with dramatic speed and height like the bean stalk in Jack-in-the-Beanstalk

Japanese knotweed spreads primarily by its rhizomes. These rhizomes may extend from a parent plant up to 7 meters laterally and to a depth of 2 meters. Very small fragments of rhizome give rise to new plants. Fresh stems produce shoots and roots when buried in soil or floated in water. Stems in water may produce viable plants within 6 days. Japanese knotweed thrives on disturbance of soil or dispersion by water flow.

Since the extensive underground rhizome system sustains the plant even when top growth is removed, the aim of control should target the rhizomes. For short term control, Japanese knotweed may be cut using a lopper or brush-cutter, but great care must be used not to spread the plant to other areas when discarding the cut plants. The use of equipment which is likely to result in further spread, such as a flail mower, is strictly advised against. Digging out the rhizomes is impossible because of its extensive underground network and cutting a rhizome may only intensify its spread. The real control of Japanese knotweed can be achieved only by chemical treatment.