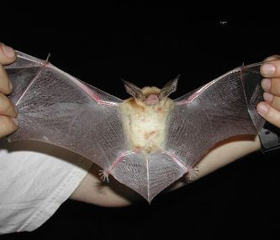 Photo: USGS
Little Furry Winged Creatures that Come to Call in the Night

Over the course of a winter, window screens can get pretty dirty. Not needing window screens in the winter, we took them down for cleaning. That was several years ago. One hot day this summer, we left the windows to our bedroom open to let the room cool off. If the lights are out, not too many bugs get in; a few moths maybe, and this time, one giant moth-eating bat.

Normally, I like bats. They are like flying bug vacuums and do a great job keeping the night skies safe from moths. To encourage the little mammals, once I even made a bat house. However, upon realizing the amount of air required to be between me and the ground should I mount the bat house at the recommended elevation high in a tree, I decided to not attempt improving on Mother Nature. On another occasion I found evidence of bats living in our attic and I decided that we could surely let the little guys have some rent free space as reward for all the hard work they do every night sucking up air borne insects. I also decided to never go into the attic again.

On that hot night this summer, Diane woke up around 2:00 a.m. She turned on the light and calmly screeched, “RICH, THERE’S A BAT!”

In my dreamlike haze I pictured a Louisville Slugger in a co-ed softball game and said, “Whuh?” I then got a truer understanding of the situation when Diane clarified her previous statement by saying, “A BAT!”

I became fully awake standing in the far corner of the bedroom, but don’t remember the process. Perhaps the human brain is unable to store and recall events that take only .0000000001 milliseconds.

The bat flew around the room like a toy airplane on a string. It was about the size of a robin, and you could tell it had murder on its mind by the way it stayed pretty much about 4 feet off the floor taking one long, circular banked turn around the room, over and over. Every time it got near me I did my “mime-in-a-box” dance trying to fool the creature into thinking that if he came too close he would crash into a glass wall. I tried to protect the poor animal by making safety sounds like “Hup-dit-dit-dot-DOH-YAYEH- dit-dut” when he would come close.

Diane did her best to assist, peering out of the bathroom, cracking the door open a micro-fraction of an inch. I requested assistance from her, using my best emergency responder voice: “Diane, get a blanket.”

She answered in the way that made sense to her. “YOU get a blanket.” I said nothing at this point because if I were to step away from the corner I was cowering in, the entire fake glass mime wall would collapse.

At about that time, the bat had finished his 400th circle and was looking for a place to land. I really thought the top of the curtains would work for him, but after inspecting and rejecting the curtains about 20 times, it appeared he did not like our brand of curtains.
Finally, Diane said, “I’m getting out of here,” and, as a good and protective husband I took the attitude of “Not before me, you’re not.”

Standing in the hallway, we considered sleeping in a different room. However, with two extra kids in the house, the best spots were taken. Besides, all of the good blankets were in with the bat. I suggested that one of us should find a blanket, enter the room, and subdue the beast. Diane responded by pulling a beach blanket out of thin air. I swear it was like one of those cartoons where the character reaches behind their back and pulls out a locomotive. Apparently, her part of the plan was done and it was my job to fight the fiend. I entered the room and, timing it just right, I threw the blanket toward the brute, coming within half a room length of not even being close. It was at that time I realized I now had no protection at all. My eyes opened to a previously unimaginable size, and I resumed my speed mime routine. I must have looked like a bug-eyed Marcel Marceau on fast-forward, except that, even with Marceau’s customary white face paint, I was probably paler.

Diane suggested we turn out the lights in the bedroom and, as she did that, I exited the room in such a way as to leave permanent burn marks on the carpet. We then went downstairs and turned on every light we own inside and outside hoping that the bat would find the open window and make his way back out. After allowing our heart rates to slow down into the three digit range, we went back upstairs to check the bat’s progress. It appeared that he either flew out the window or landed someplace. I was thinking if someone were making a teen movie, a good gag would be for one of the characters to take a pair of black socks, shake out the curtains, and then throw the socks at one of the other teens while making screechy noises.

Wouldn’t that make a funny scene? However Diane saw me get the socks out of the drawer and suggested that I “Not even think about it.” We verified the bat had indeed gone on to live another day in the great outdoors (or more likely our attic). We were able to fall asleep again safe in our bed, just as the sun was rising.
RR1009