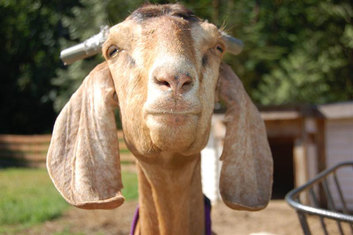 A dairy goat can produce a surprising amount of milk during their usual ten month milking season. Goat milk is used to make cheese and soap, is a substitute for cow’s milk in recipes, and is quite tasty on Frosted Flakes. A goat can be milked twice daily, about twelve hours apart, or for the lazy homesteader once daily if you are willing to settle for slightly less volume. All of this is well and good if the goat you have is already “in milk”, or is pregnant. You could simply begin milking, or in the case of the pregnant goat, wait until her baby can be weaned and then take over. My problem occurred when I had three goats that were not in milk and not pregnant. How to get milk?, I sat and wondered.

I began to look at options.

My friend Jacqui told me that I wouldn’t want to own an uncastrated male goat or buck. In her lovely lilting English accent she informed me that a buck, “can be a bit uncivilized” which is British for “nasty as all get out.” Apparently male goats engage in the disagreeable behavior of urinating on their beards or goatees. When their beard has a nice pungent odor they rub it on any readily available female. Because this odiferous beard stench can be smelled in three counties when the wind blows right, a buck is not something to keep about the farm.

A quick Goggle search found a website that suggested the average handy homesteader might enjoy to artificially inseminate their goat herd, which offered the benefit of not having to keep a buck around. Artificial insemination represents a great convenience of modern science, a relatively straight-forward procedure that requires an enormous stainless steel tank full of semen filled straws cooled by liquid nitrogen. A few clicks away I found that this option could be mine for the low, low price of seven hundred dollars. They throw in the liquid nitrogen for free.

A rental agreement proved the way to go. The goat Ferrier I hired to do hoof trims suggested that the answer to my problems would be to lease a buck. With a lease I would only have a buck for a few months and I could simply return him after my goats were bred. She said I should contact her Uncle who owned several bucks and might be willing to loan one out for a modest fee. I did just that and arranged to pick up my rented stud the following weekend. He was a handsome guy but seemed young and a little on the shy side. I was assured that he spent a large portion of his day urinating on himself and was sufficiently stinky, just what my female goats would want.

We drove him home and I introduced him to the ladies, who promptly kicked him out of the barn and ate all his food. For the next several weeks this continued. Our rented Romeo remained optimistic however, and daily attended to his stinky hygiene while the ladies continued to kick him in the head and steal his food. I began to despair, wondering if we would ever see baby goats. I didn’t need to worry for long, however, as one crisp fall morning I found the goats in the barn getting along famously, the ladies suddenly aware of a certain eu de cologne wafting their way. I marked my calendar as “goats bred” and counted out one hundred and fifty days. If all goes well this spring we will have cheese, soap and plenty of Frosted Flakes.
RR1108