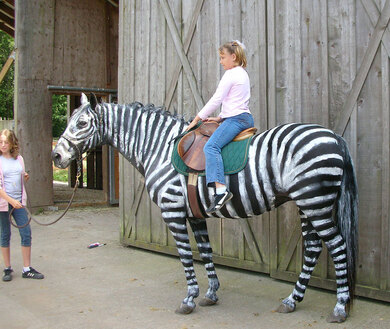 In the early years, SRN (previously “Citizens for the Preservation of Skyline Ridge”) explored events that would bring the community together socially and raise enough funds to pay for the printing and mailing of the quarterly Skyline Ridge Runner.  First there were potlucks and music at the Karin Hunt/Michael Tillson home with a “pass the hat” for donations.  The first larger attempts to raise funds were not very successful.  In 1990, a “Sassy 60’s Dance” was held at the Legion Hall.  Let’s just say that the community didn’t show up with flowers in their hair nor wearing bell bottoms.  Then in 1991, SRN and Skyline Grange jointly held a Folkart Sale benefit.  It was not highly successful, either.

Finally, in 1992, the first Summer Gathering happened at Shadysprings Farm.  It was a success in that it brought in, if I remember right, about $250 - just enough money to fund the printing and mailing of the Skyline Ridge Runner for a year.  It has been a community event ever since, until the 2020 pandemic.

I have fond memories of those early Summer Gatherings at Shadysprings Farm.  That first year we had a small silent auction and a milk can painted by Don and Hope Roach for donations.  Jan LaVoie and I volunteered our young children for the task of ridding the pasture of “horse balls” so we could have old-fashioned games without stepping in manure.  That first Summer Gathering started the tradition of a shared potluck, horse rides, old-fashioned games, music by local musicians, and an auction.  The original games were by ages, so both children and adults were invited to participate in 3-legged, sack, and wheelbarrow races, with homemade ribbons given to all.  The event ended with a “Tug for Peace.”

The Tug for Peace was well orchestrated by Ras Sauer who brought a heavy duty 100-foot rope and made sure both sides were equal in strength by occasionally assigning a new person to a side that was pooping out, thus prolonging the dramatic event.  Both kids and adults joined in.  The goal was to pull the opposing team into the forceful stream of water coming from the fire hose of our Skyline Volunteer Fire Department’s brush rig.  How our muscles complained for several days after!

In time we developed a Community Informational Area.  Local organizations, such as Friends of Forest Park and West Multnomah Soil & Water Conservation District, handed out information about their agencies.  Old area maps hung for viewing and we had a frog information table.  One year, Sauvie Island’s Oregon Department of Fish & Wildlife lent pelts of coyote, beaver, cougar, and other local species. That was a real hit.

Horse rides were always popular.  Christina Traunweiser brought her Phoenix Farm school horses Spot, Lucy, Triscuit, and Jack to give rides, the first horse ride for many.   One year, Karin Hunt, Leslie Grelle, and Karin’s granddaughter Coral painted two ponies, one to look like a zebra and the other, a Native American pony. Many local kids were photographed on those ponies.  I will never forget my uncontrollable belly laugh at Steve Fradkin’s shock thinking Karin had a real zebra. But knowing Karin, I guess her having a real zebra really won’t have been a shock.

The Shadysprings Downs Frog Race was Karin Hunt’s idea.  Shadysprings Farm had ponds full of red legged frogs.  One pond dried up each summer leaving hundreds of tadpoles stranded, which allowed children to safely catch frogs to enter into the race.  Others brought frogs from their own streams and ponds with great hopes of having a sure winner.  A large circle was made with a rope, frogs were placed in the center, and 3-2-1 the race to the rope finish line caused disappointments and victories.    Karin found a metal frog that was transformed into a winner’s plaque by Ras Sauer. This plaque is still displayed at the Plainview Grocery Store.  Each year we oversaw the care and safety of the frogs.  I think we had only one demise in all those years.  It was a good educational event.  Children learned that when an impressive, but non-native bullfrog was entered, it could not be released at Shadysprings, and ideally would be destroyed after the race.  We never did have the audacity to serve grilled bullfrog legs after the race.  It was also amazing how a tiny red-legged frog could often outcompete the large bullfrog.  One year we experienced doping.  One child brought his frog in a bucket of warm coffee, thinking that would hype up the frog to hop exceptionally fast; it didn’t.  Another year, a frog was stolen from a bucket holding Sevda’s frog, a frog she was convinced would be a sure winner.  Ah, the lessons in life that frog racing provided to our neighborhood children!

The potluck was always full of dishes made from fresh grown produce or family favorite recipes.  One of my favorite potluck stories was about old Art Cameron’s watermelon.  Art dropped his watermelon when getting into his car.  Being a practical man, he had plenty of duct tape to wrap that watermelon back to an oval shape piece of fruit.  He arrived at the potluck and proudly handed it over to volunteers to slice up.  We learned that a chainsaw should be the tool of choice when slicing up a watermelon wrapped in duct tape.

One year, Dexter Bacon made 5 or 6 very creative scarecrows/mannequins for the oral auction. They were as unique as Dexter.  Among his creations was a one-legged, guitar-playing, bra-wearing woman; several colorful musicians; and a gas-masked, totally macabre man.  I hope his inspiration came mostly from his imagination and not from observing neighbors.

Later the equine indoor arena was built allowing for most events to be under one roof, including games, music, potluck and auction.  Weather usually was wonderful, but the arena provided a cool spot on sunny days.  After many years of hosting the Summer Gathering, Karin and Michael moved on, and Skyline School, Skyline Grange, and Skyline Farm became locations before we settled on the Plumper Pumpkin Patch for the last number of summers.

If you have never attended a Summer Gathering, put it on your post-COVID bucket list.  If you plan to bring a watermelon, slice at home before arriving.
​
*Karin Hunt contributed to this story.