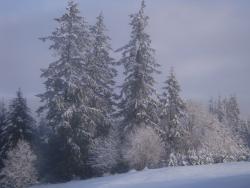 Almost every kid had some sort of sled or toboggan. Some had controls and some were out of control. But sledding down our hill was especially fun when the neighbor's mule was available to haul us back to the top.

Today some people are concerned about emergency procedures when the electricity goes out; others of us lived many years in the neighborhood without what we called "juice." When I stomped in from outside, shaking the snow from my boots, it was an unforgettable sensation to hear and smell the fire crackling in the stove and to smell that pot of something stewing on the back of the stove. To this day a wood-burning source of heat is important to me when I'm house-hunting.

An over-flowing pantry was the result of the summer's work of canning and preservation. Neighbors shared their bounty of fruit and vegetables from the garden, and smelt from the river. A very special winter treat was "Snow Ice Cream" made of fresh snow, sugar, pure cream, and vanilla... but my mother, Emma Brooks, insisted that the ice cream not be made until it had snowed long enough to "clean the air." With the snow outside and the warmth inside it was just an incredibly cozy feeling.

My earliest snow memory, however, is of my father, Joe Brooks, getting ready to go to work in the snow. He carried the rural mail. Our road (Kaiser) was one of the last to be plowed, so he left his car up on Skyline every night if it were snowing. Each morning he made sure his leather boots were heavily oiled, then he bundled up, put on a heavy woolen cap and a heavy paper sack over his head with two holes cut out for his eyes, and plunged into the drifts to get to his car a mile away. In the car were always extra tires, extra sets of chains, and lots of wire and rope. Actually in 35 years, he only skidded off Skyline once.

Snow days for school? Before consolidation of the smaller school to form Skyline School, the teachers usually stayed or lived nearby and were there for those students who could make it through the snow. If a student could get there, the student knew it would be a pretty good day with snowball fights and building snowmen. Before consolidation, buses and telephones, it was easier to have school than to cancel it. School was not a style show for the girls in the winter. In cold weather, many of us wore long legged underwear with garters and long stockings that always bunched up at the knees. Scratchy woolen skirts and layers of sweaters with laced-up ankle-topped shoes completed "the look." The whole idea was to keep warm.

Snow didn't impede the social life. A truly memorable wedding of Donna and John Pfister took place at Skyline Grange Hall during one storm. A person with a 4-wheel drive became the taxi driver and got everyone to the wedding on time safely. Since we were the first of his pick-up list, we arrived in time for the rehearsal too. It was a beautiful occasion.

When there was ice and snow, one particular group of senior citizens always got together for a homemade ice cream party. It was the only time they could go outside and get all the ice they needed for their favorite recipe. The person with the chains on his car picked up the others and the festivities began. The snow was soft and beautiful and gave off a bright sparkle in the moonlight. But what a mess it was when it melted and turned into muddy slop!
RR1103