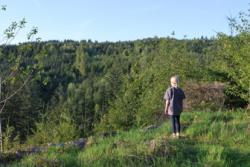 The neighborhood has two new Metro-owned properties within its boundaries. Both are designated as natural areas, Metro’s term for land reserved as wildlife habitat and as targets for watershed restoration.

On April 21, 2012 Metro natural resource scientist Kate Holleran led a tour of one of the properties, the newly named McCarthy Creek Headwaters Natural Area. It’s a 390-acre parcel north of Skyline Boulevard and west of McNamee Road. The land was purchased in November 2011 from J. Hampton (80 acres) and Mid-Valley Resources, a Portland-based forest products company that owns over 93,000 acres of timberland in Washington and Oregon.  Most of the property was logged and replanted in Douglas fir about 15 to 20 years ago.

Holleran said that when Metro acquires a new natural area, scientists write a plan of management to address issues such as invasive species, impediments to fish passage and lack of forest diversity. In the first two years after an acquisition, work is done in accordance with this plan.

At McCarthy Creek, in what called Holleran called an industrial forest, some thinning of the planted firs and creation of snags will take place, along with other restoration work. Over the ensuing centuries, fire and windstorms would do this naturally, creating a mosaic of open spaces, mature stands, tall snags and emerging trees. Metro bumps the succession process along a bit via a chain saw. Tour participants could see that the area already has places where a variety of native species are thriving. Western red cedar, hemlock, cottonwood, oceanspray, currant, alder, big leaf maple, snowberry and elderberry were spotted.

McCarthy Creek is a perennial stream, with a noisy tumbling flow in late April. Its health is of vital concern to Metro. Road building, Holleran said, is the number one cause of sedimentation of this and other creeks, especially when culverts fail.  Besides clogging gravel beds with silt, sedimentation increases water temperature, two conditions that are injurious to fish. One impediment to fish passage on McCarthy Creek is a logging road culvert perched too high above the streambed. While funds may not be available to fix this in the short term, the land will be managed to maintain (and improve as needed) the already-good buffer between the creek and the old roads. Other steps, like maintaining culverts and dropping logs into the creek to create pools, will be part of the restoration work.

The creek is vital not only to fish. Holleran noted, “Eighty-five percent of migratory songbird species use riparian areas for some or all of their lives.”

The McCarthy Creek property, which is seamed with high quality logging roads, is open to the public (with the exception of potential closures during stabilization work). Access it at an orange gate just west of McNamee Road on Skyline; it is signed as a Metro natural area. Parking is limited; do not block access to the gate.  Hunting, biking, horses and ATVS are not allowed. Nor are dogs—on or off-leash—because they are perceived as predators by wildlife.

Holleran said, “Dog use of a natural area is incompatible with protecting wildlife. Data shows that their presence alone causes wildlife to flee an area.”

The other property Metro acquired in late 2011 consists of 160 acres along Alder Creek near Kaiser Road. Alder Creek is a tributary of Rock Creek, which itself flows into the Tualatin River. That property is not readily accessible to the public and no tours of the site are planned.