Create It and They Will Come: Attracting Native Bird 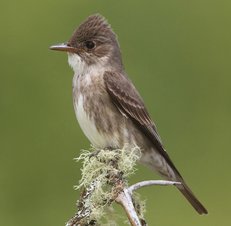 Bluebirds
Western bluebird, Sialia mexicana, is an Oregon native and classified at the state level as a vulnerable species that is likely to become endan­gered unless conditions are remedied. Their preferred habitat includes open forest stands, oak woodlands with meadows, forest edges, areas where most large trees have been removed from logging, fire or wind blowdown. Do you have the appropriate conditions in your woodland for these attractive birds?

Western bluebirds measure about seven inches in length with an average wingspan of 13.5” and they weigh about an ounce. They eat insects in the summer: beetles, ants, moth larvae, grasshoppers, and need perches (like tree limbs or fenceposts) so they can spot their prey. In the winter they eat native fruits and seeds, they do not migrate away from the Willamette Valley. Confirmed Oregon native plants they will eat include serviceberry, Oregon grape, native roses, blue elderberries, red osier dogwood, chokecherry, currants, thimbleberry, orange and hairy honeysuckle and cascara seeds.

They use vacant woodpecker holes and natural tree cavities for their nests, and will also use manmade homes if you wish to make your own, (Nestbox plans can be found at http://www.nabluebirdsociety.org/nestboxes/eastwestbox.htm) Situate nestboxes on poles with baffles to keep away cats and raccoons, some of their primary predators.

Their numbers have decreased primarily due to the introduction of the House Sparrow from Europe and the European starling which take over their nesting sites, destroy eggs, and kill chicks and adults. It is recommended that you monitor the nesting sites to keep out the predators (Monitoring information can be found at http://www.nabluebirdsociety.org/PDF/FAQ/NABS%20factsheet%20-%20Monitoring%20-%2024May12%20DRAFT.pdf.) Once you know that the first bluebird egg has been laid, it is advised that you install mylar strips to keep away the non-native birds from the nest. (More on information on Mylar can be found at: http://www.sialis.org/sparrowspooker.htm.)

Western bluebirds begin breeding in May, they can produce up to two broods/year of two-eight eggs. The female incubates the eggs for about two weeks and the male and female continue to feed the chicks after they leave the nest while the female prepares a nest for the next brood.

Olive-Sided Flycatcher
Another bird that merits habitat enhancement is the olive-sided flycatcher (Contopus cooperi). This is a federal species of concern that is declining, im­portant to monitor and is in need of conservation actions. They are also list­ed as a vulnerable species from the International Union of Conservation of Nature, so are facing threats to their population or habitat. It is believed that loss of habitat on wintering ground in Central and South America, as well as non-optimum conditions in the northern nesting areas are the reasons for their decline.

They prefer conifer forests with uneven canopies which provide lookout perches from which they can swoop down and catch flying insects in mid-air. Burned or logged forests with plenty of live trees and dead snags, mosaic of clearings in forested areas next to moist meadows, streams or ponds with plenty of flying insects are what is needed. It’s best if the remaining trees are grouped together in many different groups rather than solitary trees where the flycatchers can become easy pickings for stalking predators: peregrine falcons, Douglas and northern flying squirrels, ravens and jays.

They are about seven inches long and weigh about one ounce. Their favorite insects are bees but they also eat wasps, ants and other flying insects. They overwinter in tropical areas then come up north to breed, males come first in late April-May and females follow. Nests are built on the outer lengths of branches way up in tall conifers which are formed into open cups interwoven with twigs, small roots, and lichens.

Olive-sided flycatchers are late nesters with egg laying in mid-June to mid-July, typically one brood/year with two-five eggs incubated by the female. The male feeds the female and both parents feed the young.

Habitat can be enhanced with prescribed burning and understory thinning to create patchy mosaics. Limit post-fire salvage by retaining large trees or snags in logged or burned areas or by creating snags. Minimize pesticide spraying near the nesting birds. The species is listed as a vulnerable species in Oregon whose habitat may be limited due to the need for insects found in large diameter live trees or snags.

Pileated Woodpeckers
As many people know, Woody the Woodpecker was modeled after this unique bird with a large crested red head who creates a loud drumming sound when searching for their favorite insect, carpenter ants. They measure about 18” long with a wingspan up to 30” and a weight up to 12 ounces. They also consume beetles and larvae, termites, other insects, seeds, nuts, and fruit. Their predators are squirrels, hawks, and tree climbing snakes.

They are non-migratory, monogamous, live about nine years and can occupy territories of about 1,000 acres year round. In their courtship dance, one bird bows, scrapes and steps sideways in a circle around the other bird. After a mate is chosen, they make large rectangular cavities usually in dead trees 15-80 feet above the ground. Larger diameter trees are typically chosen to accommodate the large cavities. Nest construction can take three-six weeks with a cavity depth of one-two feet! Creating a cavity can be found at this You Tube link: https://youtu.be/LPiCAPibtr4. They make multiple entry holes so they can escape from predators.

They breed in April and produce two-six eggs which are then incubated by both parents. Both parents feed the chicks by regurgitation. The parents and young birds live together for two-three months during which they are taught how to find food by their parents who probe in dead wood to search for insects. The young go off in search of their own territories in the fall after they are well equipped with parental advice.

Pileated woodpeckers help up to 24 species in the forest who use the holes they create for their own nests and homes. Pileateds help to recycle forest nutrients by actively breaking up dead wood in search of insects. They decrease populations of insects. If they are present in your woodland, suet feeders can bring them closer to key spots for better viewing.

Steps we can take to provide good habitat when we know that these woodpeckers are present:
•Remove wood mechanically instead of burning to retain their food source-insects. Carpenter ants areeliminated by fire.
•Retain abundant supply of large logs and dead trees.
•They prefer older timber stands with large Douglas-fir (70-100 years old).
•They will also nest in nest boxes about 15 feet above the ground.

The following are some websites used for reference and for more detail:
Olive-sided flycatchers: http://www.fs.usda.gov/Internet/FSE_DOCUMENTS/stelprdb5182039.pdf
Pileated woodpeckers: https://www.allaboutbirds.org/guide/Pileated_Woodpecker/lifehistory
http://www.fs.fed.us/pnw/sciencef/scifi109.pdf