An Old Husky Insulted by a Young Duck 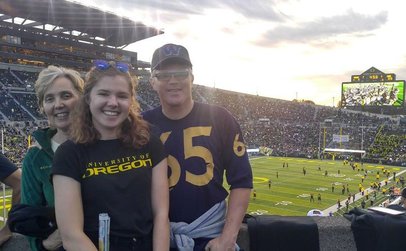 When I graduated from high school in Vancouver, WA I was surprised to learn, given my GPA (not too good) and SAT scores (not too bad), I qualified for almost any in-state public university that had low enrollment that year.  Having high academic aspirations but few marketable skills, my personal goals were best summarized, as my Dad put it, “very much wanting to postpone entering the real world”.  After tens of minutes of tireless research, I decided to pursue the only in-state school I knew of that had a winning football team that year, which was the University of Washington.   My Dad, in the spirit of “not wanting to spend any more money than he absolutely had to,” suggested I attend Clark College, known locally as Hudson’s Bay north or UCLA {University of Clark, Local Area}.

I consulted with my older cousin Jim, the first person in my family to start although not actually finish, college, and he advised against it.  “I had the grades out of high school to go to UW.” he said.  “But, after going to Clark only Wazzu would accept me.”   Wazzu, of course, being the colloquial name for Washington State University.  Back then the University of Washington was somewhat conceited and did not like accepting junior college transfers.  Contrast that to today where UW is phenomenally conceited but are forced by the state legislature to be more accepting of junior college transfers, in the spirit of “not wanting to spend any more money than they absolutely have to”.

Armed with my cousin Jim’s advice, I talked my Dad into sending me to UW where in a short 4 and ⅔ years I learned two important lessons that I still live by today:  1) Follow your dreams especially if doing so allows you to escape a Podunk town such as Vancouver, WA and 2) Wazzu sucks.

Question: How many Washington State cougars does it take to change a light bulb?
Answer:  There’s no electricity in Pullman.

My daughter is having a much different academic career than I had, by which I mean she doesn’t suck.  I was so proud of how well she did at Lincoln High School I was prepared to send her to any university she wanted.  After finding out the price tags attached to private and/or out-of-state schools I said, hoping it was true, “There are some excellent public universities right here in Oregon.”  It turns out, through no fault of my own, that this is true.

The first time I visited the campus of the University of Oregon was the day I helped my daughter move in.  Even though I am an unreformed Husky fan, I am having a difficult time holding on to my hatred of all things Duck.  It turns out UO has a beautiful, if very flat, campus with a river running through it.  The academics are very good and, if you can avoid fraternities, something I was unfortunately not able to do, a student can get an excellent education at the U of O.

I used to root for the Ducks if and only if they were in a bowl game and therefore, were representing my conference (they usually lost).  My wife, who attended the University of Utah, has been cheering for the Ducks ever since our daughter started attending the U of O, even during the regular season. In support of my daughter, I have been rooting for the Ducks much more, but it seems every time I do they lose.  Hoping this is more than a coincidence, I plan to root for Oregon in a lot more often unless they play Utah in which case I plan to root for whichever team is ahead.

This season, my lovely daughter unexpectedly secured tickets to the Ducks vs. Huskies football game at Autzen stadium and my wife and I gladly drove to Eugene for the contest.  It was a lovely day.  My wife showed where her sympathies lie and, for this game at least, wore green.  I had heard a lot about Duck fans at Autzen stadium and prepared for the worst by wearing every article of purple I could find.  I was disappointed when it turned out that Duck fans are very gracious and sportsmanlike and the only people acting like jerks were Husky fans.  Thankfully there weren’t too many and the game progressed they way I like with my team scoring early and often.

During the second half, my daughter was kind enough to sit next to us (all her friends having left at halftime).  I cheered politely in a cocky if condescending manner at everything good that happened to the Huskies and, in the spirit of good sportsmanship and fairness, everything bad that happened to the Ducks.  My daughter sat quietly staring straight ahead not necessarily following the action on the field, enduring the groans of her fellow Ducks and the cheers of her purple clad, clearly-rooting-for-the-wrong-team Dad.  During a break in the action when the officials were reviewing a call, I said out loud to no one in particular “I wonder what they are reviewing?”   I was hoping that it would be in the Huskies favor so that I could say something outwardly non-aggressive yet still understatedly superior such as “Well then”, or possibly “There you have it”.  My daughter, wearing a green jacket with a large partisan letter ‘O’ on the back that I bought for her, said something that clearly let me know we were not rooting for the same team anymore.  In a tone of voice which could have been interpreted as being “under her breath” but clearly loud enough to be heard by most of the fans remaining in our section she answered “Whether or not you still suck.”

I looked at her in disbelief as a father that had taught his one and only child from birth to be gracious in defeat (even when you know the other team just got lucky and the officiating was clearly biased) and, to be humble in victory, (even though you know the other team truly deserves the beat down they just received and should be glad we didn’t tack on another 20 points even though we clearly could have.)  Pretending she was merely citing an authoritative source, she shrugged her shoulders and stated, as if helping to clarify, “Ruling on the field is: you do.”

Shocked, shocked I was.  For 19 years my daughter and I had happily watched sporting events always rooting for the same team.  In good times and bad, even when she would have rather been doing other things, I taught her to root for whatever team I happened to like that day, and she did.  I tried to say something positive like “Your team isn’t completely hopeless..”, but was quickly interrupted.  With an assertive, upright posture she looked me square in the eye and in a clear, confident voice said “AND THE RULING IS CONFIRMED”.

I did not know how to respond because:
1.       I was on the receiving end of a very clever insult that I completely deserved.
2.       I was trying so hard not to laugh that Junior Mints nearly came out my nose.
and lastly,
3.       My daughter is becoming her own person and clearly no longer needs her Dad to tell her what team she should root for.

The Huskies won that day 70-21 breaking a 12 year run in which the Ducks beat the Huskies by an average score of 42 to 19.  I don’t know if saying this makes it any easier for Duck fans, and I say this in all honesty as a loyal fan of a longtime rival, you truly deserved it and we easily could have scored 20 more points.

I am glad that my daughter is true to her school.  I am very proud to see her grow into a beautiful, smart, well educated young woman with a terrific sense of humor. With the University of Utah joining the PAC-12 and my daughter attending the University of Oregon there are now 3 PAC-12 teams represented under our roof, at least during school holidays.  All three of us are getting better at agreeing when to disagree.

And, even though she no longer relies solely on her parents to guide her in what is right, what is wrong and what teams to root for, I take comfort knowing there is one rock solid belief that all of us, as a family, believe in and will continue to believe in, no matter what the future may hold: Wazzu sucks.