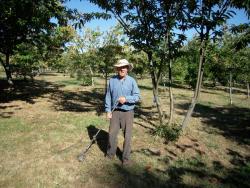 Driving along the twists and turns of McNamee Road, you may have noticed an orchard of unusual trees. That’s where Chris Foster and Andee Carlstrom have developed a thriving business growing organic chestnuts under the name ‘Cascadia Chestnuts.’

They moved to the McNamee Road property in 1986, and in the mid 1990s started experimental plantings of chestnuts in a former cow pasture. They now have over 350 mature trees on 5 acres. Theirs is the only organic chestnut orchard in Oregon, with organic certification provided by both Oregon Tilth and Salmon Safe.

“I always wanted to pursue farming,” Chris said. “I come from a long line of farmers. I grew up with old chestnut trees in my backyard. I collected seed and planted them out while in high school.”

They have discovered that chestnut growing is very labor intensive. Their orchard produces between 5,000 to 10,000 pounds of fresh chestnuts annually, all of which are harvested and processed by hand.

Chris mostly works at home for his “day job” as a commercial building construction consultant, and so is able to fit farm work into his daily schedule. Andee, who works part-time as a pediatric nurse at Emanuel Hospital, works in the orchard evenings and weekends.

Chris grows cultivated varieties of the European chestnut (Castanea sativa) that he has grafted on seedling rootstocks. He originally collected 25 cultivars from the western U.S. and Europe, and over time selected the six best ones for local conditions. Chris learned how to graft with apple trees which he says are easier than chestnuts.

“Many people have tried and failed” growing chestnuts in Oregon, Chris said. “You need persistence and dedication. Chestnuts are not an easy crop to grow.”

Commercial viability is especially challenging for organic growers since they are limited to approved fertilizers and pest control methods. Monitoring is very important, Chris says. He and Andee watch for boring insects slowly climbing up the trunks of susceptible trees during a two-week period in spring, so they can catch them before they infest the trees.

Finding little research or extension help locally, Chris has consulted and attended conferences with other growers in the U.S., France, Italy and Australia. He advises potential chestnut growers to be ready to experiment and to learn what works for them by trial and error.

“We would be further along,” Chris said, “but I am prone to experimentation. I’m always trying different methods and looking for better trees.”

Chris and Andee are active in the national Chestnut Growers of America (www.wcga.net). Chris was president of the organization five years ago.

The trees need annual pruning to keep them within easy reach from a ladder and also to produce nuts of large size that are easier to collect off the ground than small ones.

Chris makes his own organic fertilizer of composted tree prunings mixed with chicken manure. He spreads this under the trees to improve soil fertility and encourage native soil fungi that are antagonistic to phytophora.

The labor-intensive job of hand harvesting usually begins in late September and runs about 30 days. After the prickly husks open, the nuts are collected with long-handled scoopers. They are then washed and sorted by hand. An organic-approved disinfectant like hydrogen peroxide is applied to kill bacteria & molds.

Chris and Andee have a walk-in cooler with a controlled atmosphere to store the nuts during and after harvest. This is essential for extending the selling season for fresh chestnuts, which are perishable if not carefully stored.

They sell most of the crop to local retail stores. New Seasons is their largest customer. Next time you’re at the store in the fall or winter, ask for a bag of fresh chestnuts. As you enjoy them, you’ll now know where they come from.