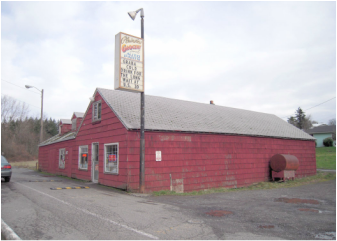 At the corner of Cornelius Pass Road and Skyline Boulevard stands a neighborhood landmark, the Plainview Grocery. It is the place that we all run to when we need to pick up a gallon of milk, check for a missing pet or secure a Skyline Ridge Runner we have missed. The market supports the neighborhood as well as reflects the changes that our area has seen over the past decades.

Owned and operated by the Linden family, Steve and David, the building was built by Harry Herzog around 1938 during the Great Depression. After a WPA project replaced the Skyline School gym, there was timber left from the old gym. When the timber was put out for bid, nobody came forward so Harry Herzog bid on the timber and used it to build the store that now stands.

When the U.S. entered World War II, the draft board informed Harry that a store merchant wasn’t an essential job and he would be drafted. He decided to go back to his former job, logging, an occupation deemed to be essential to the war effort. While he was in the woods, the store was leased to Steve Linden’s great-uncle, Ben Olson. Towards the end of the war Harry decided to sell the business. Ben wasn’t interested, but thought his brother-in-law, Alex Linden, might be. He was.

Under Herzog’s ownership, the store was about half the size it is now. In 1949 Alex doubled its size by expanding from the front of the store back. He had bought a cooler prior to the expansion and stored it in someone’s barn. He included the cooler into the new structure; it remains in the store but has been updated over the years. The auto parts section of the present building used to be the warehouse/storage area.

Some people remember a water spigot at the corner of the building. Many recall, from the 1940s to the 1960s, filling water containers here from early in the morning until late at night. Wells were, and still are, expensive so people either had shallow wells or cisterns that went dry during the summer. They also might have to haul water as it was needed.

Christine Traunweiser remembers having no water at her farm in the late 1970s. She would come down to the store to get water, bringing five gallon buckets or pulling a 250-gallon tank behind her truck. She also recalls that people could buy kerosene from a large drum that remains standing behind the door in the auto parts section of the store.

Beginning in the 1940s the market supplied petrol to cars traversing the pass. It was a Shell station and therefore the store was painted the identifying “Shell yellow.” Not only was the market a bright yellow, but Alex convinced the company to also paint his home. Hence, the little yellow house was born. The market, however, had an additional note of color with a red stripe around its base. The pumps stood where the curb now marks the division between the market driveway and Cornelius Pass Road. They were removed in the 1980s when Shell changed to more specialized pumps. The store was repainted red in the mid-80’s after the gas pumps were removed.

During the 1940s and 1950s, the market, at about 3,000 square feet, was the largest in the area, on par with the more urban Piggly Wiggly grocery store in Portland, which was between 3,000 and 5,000 square feet. In addition to carrying produce, meat and dairy, the Plainview featured clothing for loggers.

Running the store was a full-time occupation and eventually took its toll on Alex and his wife Elsa. In the 1940s, Alex ended up in the hospital with pneumonia and less than a week later Elsa also went to the hospital with pneumonia. Herbert and Frances, their son and daughter-in-law, ran the store while they were in the hospital. When Alex and Elsa recovered, it was agreed that they needed help. Herbert and Alex became partners.

Plainview Grocery has transformed over the many years from a full line market into a convenience store. In 1985 Steve added an auto parts section.

When asked how, Steve envisioned the store in the future, he mused that it might become more of a deli. As with all businesses, he works to meet his customers’ changing needs and desires. So as our community continues to change, so will our “little red store.”
Rr0110