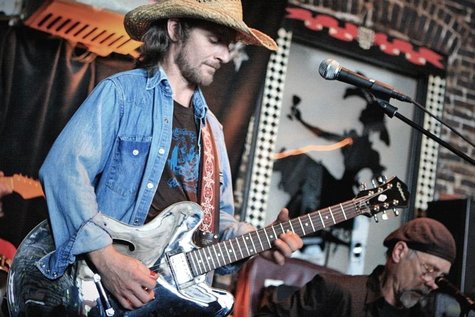 Jimmy Boyer a long time (since the 80’s) resident of our neighborhood (Skyline Blvd) and musician died at age 47, January 21, 2016 of liver cancer. He is survived by his parents, Jim and Sandy, of Cleveland, Ohio, several siblings, and many nieces and nephews. Friends gathered shortly after Jimmy died on January 31st at his home on Skyline to remember and celebrate Jimmy’s life. At that gathering the following remembrance was offered by his friends Jessi Spero and Christopher Webster. We feel that we can not improve on the following tribute.

On the 1st day of November in 1968, James Robert Boyer’s magnificent star burst onto the scene, and from his first breath, the world would never be the same.  Jimmy’s kind, open heart and welcoming presence touched everything he came in contact with to such a degree that in living his life, he left a trail of gracious beauty and song that will never be forgotten.

Jimmy was born in Cleveland, Ohio and carried his authentic, loyal and hard-working
midwestern ethic with him wherever he went.  Whatever he did he put his whole heart into.  His mother Sandra said that he was “wild about baseball” and played on a traveling team as a teenager.  And so, when his deep love of music met his love of the road, he headed to New York City at the age of 18 with his guitar, following in the footsteps of his heroes to the East Village where he found work and busked on the streets until the road called him again— this time along Route 66 to Flagstaff, Arizona.   While he was there, his every waking and dreaming thought was of music.  He wrote prolifically, played out constantly, made his first two recordings and fronted his first two bands there.

Following a tip that Portland had a vibrant and unique music scene and liking what he saw there on a visit, he threw the dice once again and made it his final move, in 1991, eventually landing him in the woods, up on *Freak Mountain*, where he would stay. He was in search of a caliber of musicians who could match his creative spark, and share his love all types of music and he found them.  Jimmy’s presence elevated an already astonishing music scene to new heights and created a legacy that will continue forever. Jim was a natural storyteller and his eloquent ability to craft a song spoke of his personal journeys and how they related to the human experience he felt all around him.

He saw life as ever-changing and eternal, and he saw himself as a resonant part of the natural world of sun and moon, trees and clouds, mountains and birds, dimension, perception and dream.  He had a deep reverence for those who came before him and he was certain in his gratitude for the skill and camaraderie of those surrounding him. He had a sublime sense of words, rhythm and time, and a gorgeous, cinnamon honey sunset voice that was a driveline to the heart of spirit and mystery.  It was in his ability to feel the soul of a song, and to serve the music in such a humble way, that made him an exceptional player with a signature sound.

He was a consummate performer who commanded great presence on stage, and he loved the energy of the city.  He suited up and showed up and he lived life on his own terms. He had the most wonderful, deep laugh that could put anyone at ease. He valued life and made sure people felt included, appreciated and loved.  He was an outlaw with an old fashioned, respectful way about him. He loved to be out & about *in town*, running into folks and buying gifts for his friends. He was smart and well-read and deeply spiritual and always curious.  He was incredibly compassionate and kind and ever ready to give anything he had to anyone who needed it. He was a forgiving and sweetly sensitive soul with a thoughtful intelligence who was excited by life and longed to connect with others.  And, at the end of the day, he found his peace and solace in the quiet of the woods with his hill family, where he always returned. In remembering Jimmy, we have the opportunity to be even more loving, caring, open-hearted, shining, inviting and present beings in our lives simply because he taught us about that grace.  It was his true gift.

And in praising his life and feeling the tenderness of his passing, we are tasked with grieving this tremendous loss in our lives by remembering him well & loosening our tears to help the river rise up and carry his boat to the other side—into the arms of his ancestors and all of his musical comrades and heroes.  Let it rock. In this, we feel his gracious spirit return home and give thanks for our immeasurably good fortunes to have crossed paths in this lifetime with such a stunning individual, and to have had such special and close times with him. May his beautiful and mighty echo resound (today) as he flies safely and free, over this land that he loved and cared for so well, his home base and his safe place.  May we be blessed to carry his kind and generous, welcoming, humble and loving qualities within us as we draw each breath into our futures.  May his well-loved memory be dearly blessed and may his name live on forever in our hearts, thoughts, words and deeds.   May it be so.

He’s on his way. There is no question.