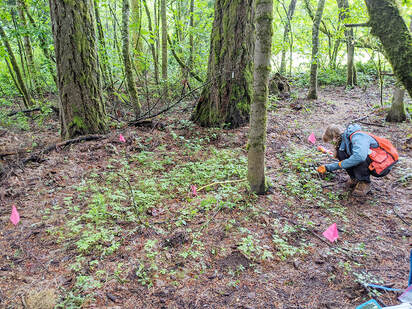 One of the first projects I worked on as a new intern with West Multnomah Soil & Water Conservation District (WMSWCD) was the Understory Seeding Project headed by staff conservationists Laura Taylor and Michael Ahr, and I was absolutely ecstatic at the opportunity to be involved. Officially part of the District’s Forest Understory Vegetation Enhancement Project, this project was funded through the Natural Resources Conservation Service’s Conservation Innovation Grant, and was undertaken to figure out how to increase native groundcover using native seed mixes, especially on sites that had once been overrun by invasive species. Several properties had been selected as study sites in 2018, and during spring 2020 I went with Laura to check on their progress.

The first site we visited was a narrow forested patch between two homes. The understory was fairly clear and open, with some large shrubs and a thick layer of leaves on the ground. The site had recently been cleared of ivy and vinca, leaving a blank slate on the forest floor for the native seeding study. When we arrived, I saw that this site was already showing signs of success. In the first plot was a circle of bright, new green with a neon pink flag in the center to mark it as one of our study plots. In all, there were six plots at this site: two were seeded with a native seed mix; two were raked first, then seeded with natives; and two were raked but not seeded, as control plots. Not all of the plots at this site were covered in bright green baby plants, like the first one. For example, it looked to me like the plots that had been raked first, then seeded with natives, were more densely peppered with seedlings than plots that had not been raked first. However, we were here to do more than just visually evaluate the greenness of the various plots. This was science! We had data sheets that needed filling.

Before I could really be useful collecting data, I needed to learn to identify the plants we were observing. I was already comfortable identifying a lot of the native plants found in the Pacific Northwest, but I discovered that seedlings can look vastly different than adult plants; some of the seedlings were so tiny, they could have fit on the head of a nail! It’s difficult to tell them apart when they are that small. Luckily for me, Laura is an incredible botanist and a wonderful teacher, and I soon learned to pick up on details like the hairs on a tiny stem, or a notch in the tip of a leaf. As we started to count the plants in each plot and record them on our data sheets, I began to feel more confident. There is something so joyful to me about identifying plants, like the feeling of meeting a new person you can just tell you’re going to like.
Over the course of a few weeks, we monitored all eight sites. Some were mostly bare, with islands of seedlings, like the first site. Other plots were covered in grasses, and we had to hunt for our neon pink markers. In some cases, our markers had been eaten by elk, and we had to find the plots using photos from previous years!  Once we found the plots, we surveyed them for plant diversity and density, paying closest attention to species that were present in the seed mix we had used. We also noted if other plants, such as ivy or vinca, or natives not present in the seed mix, were present in the plots. Once we had collected data from all eight sites, we were able to look at trends across the whole project.

The data showed that my impression at the first site was correct: raked plots typically had more plants on them than plots that hadn’t been raked. This is probably because raking away debris before planting helps seeds get better access to soil, making it easier to establish than if they had to contend with dead leaves and branches. This means that if a landowner wants to maximize coverage in their seeded areas, giving the ground a thorough rake before seeding might be worth their while.

The downside to this is that raking an entire forest would be extremely labor intensive, not to mention extremely disruptive to plants, animals, and soil. The best way to use raking is to choose small patches scattered throughout the understory, and rake and seed those. But what about those unraked parts of the forest (which will be the majority of the forest)? Can property owners do anything to improve the understory that has to be left unraked? Well, another trend we found was that plots which were not raked but were seeded still had a higher density of native plants than the control plots. As a bonus, they also had a lower density of exotic plants than either the control plots or the raked/seeded plots. This means that simply seeding their land without raking can be significantly beneficial to a landowner’s understory. This method won’t provide the same diversity or density that raking first would, but it will still help promote native plant populations. A landowner could even use a combination of raking small plots and seeding the rest of the understory to maximize native understory plant coverage

Another interesting result was the discovery of which species performed best in our plots. The seed mix used on the plots contained 17 different species, but some species didn’t perform well—or at all. For example, we did not see a single penstemon in any plot. (Such an underachiever.) Native understory seed mix is currently pretty hard to find, and expensive when you do come across it, so it’s important to know that your money is being spent on seeds that will perform well. According to our plots, the best investments seem to be: inside-out flower, small-flowered nemophila, miner’s lettuce, western fescue, pathfinder, sweet-cicely, Columbia brome, and blue wild-rye. Even though these species may be difficult to find as seed in stores, WMSWCD recommends that landowners who have these plants present on their properties can try collecting their seed and spreading it to bare areas of their properties. Just be very careful not to collect seeds from a plant you aren’t sure about—you don’t want to accidentally collect and spread an invasive species!

WMSWCD will publish a formal, detailed report on their findings later this year, so the entire community will have access to the information gleaned over the course of this study. And landowners can expect understory seeding to be included in more of the projects they undertake with WMSWCD.  As WMSWCD shifts to exploring understory seeding in practice, other partners will continue exploring experimentally, such as Erin McElroy, a graduate student with Portland State University’s Department of Environmental Science and Management. Erin has been monitoring plots of her own using a similar protocol to the one WMSWCD used, but she has been including even more variables, such as the presence of worms, the soil profile, and aspect at her sites. Her research will help fine-tune the ways in which land managers can make their understories as successful as possible. She is also contacting local nurseries to talk with them about their interest in producing and selling native understory seeds, so she could have a direct hand in making seed more accessible in the Portland area. I feel so lucky to have been able to contribute to this project, and I’m excited to see how Erin, the WMSWCD staff, and the rest of the Understory Seeding Project partners continue to explore this topic.