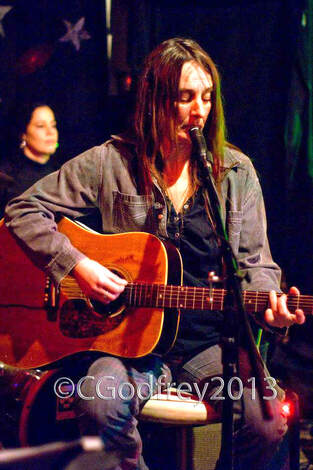 One of my earliest music memories was of my Mom and Dad sitting the four of us kids in front of the big wooden console stereo system. They put on the 45 record of the Beatles song., “She loves you, ya, ya, ya.  Then Dad would pick a harmony for each of us to sing. Ya, Ya,Ya, Yaaaaa.

We also went camping every summer in the Rambler 550 station wagon.  My brother would pound on my Dad’s backrest playing the drums.  My sister and I would sing harmony and be the guitar parts and my little brother, well, I don’t remember what part he did, maybe another drum.  All of us played music.

Mom liked Country music and Dad loved Jazz.  He turned me on to Monte Ballous’s Dixieland Jazz Band, Carl Smith and the Natural Gas Co, etc.  Fast forward fifteen years.  I moved up on the hill when I was 19.  I lived in a 1940 Vagabond trailer with my chickens, goats, ducks and dogs.  I started working at Rock Creek Tavern and listened to a lot of great bands.

That is where I met Bob Shoemaker and Billy Hultz.  The “Reverend” Billy Hultz was an amazing washboard percussionist.  He put together a thirteen-piece band called Billy Hultz and the Welfare Ranch Rodeo. He was Mayor Bud Clark’s favorite band and played the first Mayor’s Ball in 1986 at the Memorial Colosseum.  I learned the song, “I can’t stand the rain” by Mary Ann Peebles for that show.  Taj Mahal also has a version of that song “I really love the rain”.  Check it out.  Billy Hultz moved to Cannon Beach, continued to play music and wrote articles for the Upper Left Edge newspaper.

I played guitar and sang with Bob Shoemaker for years in the Welfare Ranch Rodeo Band.  By then it was a five-piece band with rotating guest musicians.  We did Baloney Joe benefits every year in NW Portland, played Portland Clubs and private parties.

Then I met Tim Acott, a talented bass player and Billy Kennedy, an amazing guitarist.  Billy K was my champion.  He writes and plays brilliant quirky songs and taught me a lot about rhythm guitar.  Tim and Billy introduced me to many talented musicians.  Billy brought a young Jimmy Boyer to one of my shows and forever after we all played music with many people in many configurations.

I met “Little Sue” soon after and we played every Monday night at the White Eagle on North Russell St for almost 8 years.  That was a great run!  Little Sue moved here from West Virginia and is an outstanding guitarist and song writer.  We continue to play at the Portland Nursery Apple Festival every year and once a month at the Laurelthurst Public House.

Back in the day, Karin Hunt had Billy K, Dave Reisch, Jimmy Boyer and I start the music every year for the first Ridge Runner Gatherings at Shady Springs, Karin’s barn.  Dave would set up the sound system in the arena, we’d throw tarps on the sand and Karin would make sure the cooler was “full.” Ah, the good old days.
Music has taken me to Clarksville, Tenn. where I played music with Max Bullen. I busked on the streets of Amsterdam, the Netherlands with Billy K.  My guitar case was filled with money from around the world and each day I’d go to central station to exchange the money into Guilders.  The women who did the money exchange would roll their eyes when they saw me coming with a sack full of coins.   I went to Thailand with Dexter Bacon where I left a banjo with the Thai kids. I went to Austin, Texas, playing with Billy K. in roadhouses and to Seattle playing Bumbershoot and the Folk Life Festival.

I currently am in a rock band called Gravel, playing electric guitar with Lou Lazada, Dan Haley, Bob Wadle and Albert Reda.  We play at a variety of local venues.  Check out our Facebook page.

I have written the songs on two albums while living on the hill.  My first album is called “Up on this Hill” and my second is called “Strange Bird” which I recorded in a cabin on Beck Road.

So the music keeps on playing, and there are many more roadhouses to visit so I maybe I will see you at the next show.

Follow Lynn on https://www.reverbnation.com/lynnconovermusic and https://lynnconover.bandcamp.com/. Thanks to Kathy Lamb who contributed to this story.
(RR 04/19)