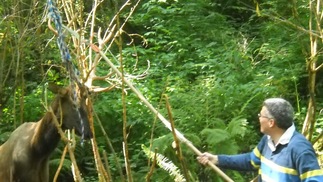 A few years ago, as part of my on-going efforts to maintain a state of denial regarding the aging process, I built a really big tree swing in the back yard. Despite it costing a lot of money, taking a lot of effort to create, and shredding my dignity during the maiden voyage, I love my swing. (See the Swing and the Doink).

To me it was like one of those bookshelves you buy in a kit and put together yourself. It doesn’t matter if you spent twice the men you should have for a bunch of flimsy, Swedish particle boards.

Nor does it matter that, when you are applying the finish, you highlighted the natural beauty of the blood stains you made banging it together. No, what matters is that you did it yourself. The amount of labor, love and self-loathing that you exerted on this project has altered your brain into loving this wreck of a bookshelf. Only those who reside in communist dictator- ships or frequent big-box do-it-yourself furniture stores can truly understand why you love your bookshelf. So it was with me and my tree swing.

I will admit that the swing has caused some mental and physical scars. It won’t pass any safety inspection. The knots I used to tie it to the tree may have chafed so badly that only one or two remaining strands of rope are holding it together. I don’t know because I sure as heck am not going back up there to check it out, but I still love my swing.

Often when I wasn’t tricking some friend or neighbor into hurling themselves off the makeshift platform that is, in fact, an old ladder, I would walk by and simply admire the swing. There it would be, a 2x6 dangling in the air like a leaf on the end of a spider silk seemingly floating, suspended by unseen forces.

Swing time philosopherI enjoyed just sitting on the swing, looking up, rotating slowly, swaying back and forth contemplating life’s questions like, “Just when did I start getting motion sickness?” Seriously, I used to be the only one on the sailboat who did not turn green when the wind died and the boat bobbed helplessly with not even a breeze to stabilize the sails. As the boat sloshed back and forth, up and down, to and fro, I would be having such a good time that I would go back to the cockpit and ask the green faced occupants, “Hey! Isn’t this fun?” (answer: ‘raaalph’). Yes, I pondered many of life’s questions while sitting on my ‘Thinking Swing’ getting sick as a dog.

I remember thinking I should hide the swing when not in use so that people would not injure themselves while I was not there to watch. Not much chance of that, since the swing is located a full quarter mile from the house, in the bottom of a 100 feet gully and can only be reached by crossing a wild and untamed creek which is always muddy and can, during winter rains, overtop your boots with water (I hate it when that happens). No, I could not see any reason to not let the swing dangle, free and happy. That was until we caught an Elk.

Sometime last July, during the three weeks we were away on vacation, the tree swing inadvertently became an Elk trap. On the morning of our return (or afternoon or possible early evening, I’m not sure; there was jet lag involved), my fourteen year old daughter and her friend came running up from the creek at full speed shouting, “There is a really big deer caught in the tree swing!” I sprang into action, nearly killing one of our dogs as I knocked over a chair.

“Keep the dogs in the house”, I said. “The poor animal”, I thought. “I can save Bambi”, I thought. “I must not call the TV News stations because they will find out it’s my fault for not putting my toys away", I thought.  My wife, who is probably ten times smarter than I am, (just ask her), rushed to the phone to find someone competent in such situations, and to be ready to call for medical assistance.

What Would Marlin Perkins Do?I knew then that my years spent watching ‘Wild Kingdom’ were not wasted. What would Marlin Perkins do in a situation like this? I know, he would send Jim in to get pummeled and provide comic relief. Since Jim was nowhere to be found, I would have to perform both roles.

I found a pole saw which, up until then, had been used primarily to knock over things in the shed, and headed down the hill to free the animal. The 2x6 that had been the seat of the swing had become dislodged. The blue and white swing rope was wrapped in and out of the animal’s antlers and wound up so tightly that he could barely keep its four feet on the ground. All of the nearby saplings had been trampled and chewed up. He had thrashed and spun around so much that there was no slack in the rope at all. He must have been strung up like that for days, or more. He was skinny and dehydrated, but he was still a magnificent animal and, I must say much, much bigger than me. It turned out that instead of catching a big deer we caught a five-point Bull Elk!

I wished we would have caught something horrid like a crocodile or a rattlesnake; something you could just shoot and feel good about it. Or something small and fluffy, like a bunny. Everyone loves to rescue bunnies. But I never wished to be called upon to rescue something that was re- ally, really big and had giant death-causing antlers.

The Elk tried to back away but, as he did so, his two front feet came off the ground. Reassured that the Elk was REALLY stuck and could not easily kill me, I crept closer. I kept saying things like “Easy big fella, everything’s going to be OK.” My daughter offered assistance by reminding me that elks don’t speak English. What she didn’t know was I was talking more to myself than to the elk and that it was not working for either of us. At that point, my daughter and her friend decided to give the elk a name, 'Tangle".

After about 30 minutes of trying to cut a moving rope 8 feet above my head, I wondered two things: 1) how do you sharpen a pole saw? and 2) how did I manage to get so out of shape? I knew there was no way to disentangle all of the rope using the pole saw so I thought about using a chain saw to cut off the big guy’s antlers (they grow back). I thought better of it when I imagined myself reading the newspaper headlines from prison: “Poacher snares Elk in homemade trap; kills animal with chain saw.”

After about an hour, he was finally freed. There was still quite a bit of blue and white rope in his antlers, but no knots. We were both a little surprised at our new-found situation. He found himself able to back up while keeping all four feet on the ground. I found myself five feet away from a giant Bull Elk having nothing but a pole saw to defend myself. Fortunately we both had the same thought: “That guy is going to try to kill me” and we both began to back away. After two backward steps, he fell down. I declared myself the winner, turned and ran away. Thank- fully he did the same and that was the last I saw of Tangle the Elk. I hope he’s OK.

To see more of Tangle, search Google or YouTube for ‘Tangle the Elk’