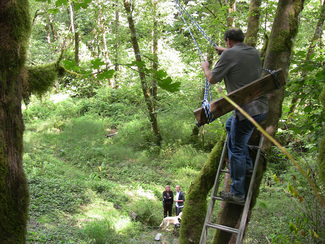 The Swing and the Doink

I have always been fascinated by air, specifically air that separates me from the ground. Being high above terra firma has always given me a feeling of being alive in ways that, for other people, can only be satisfied by running with live bulls. Any place where a sudden slip or structural failure could cause instant death (or even slight injury) does it for me including tall bridges, trees, ladders and platform shoes.

Surprisingly, flying on airplanes does not give the same kind of thrill because of their terrific safety record. To make flying more interesting I often imagine how I would be the hero of the plane crash carrying stunned and injured passengers away from the burning wreckage (babies first, fat stinky guys last). However, when starting up a conversation with a stranger on an airplane, it is best to keep to yourself that you hope to, one day, survive a plane crash.
It’s not that I am brave, however. Most of the scary things I have done in life have also involved me screaming like a little girl. My friend Wally, who participated with me during my first bungee jump said once, “Good job screaming, it gives everyone a chance to see you do some really stupid things.”

Actually being a coward is helpful in some ways. To get the same thrill that requires some to climb El Capitan in Yosemite, all I have to do is climb a ladder. Not only does this save on travel costs and expensive equipment, but I normally don’t have to take weeks off from work unless of course you count recovery time from falling off the ladder.

"What was I thinking?"

Some time ago, I was watching maniacs climb a tree on some TV logging show. Like a lot of red-blooded American men who find themselves later asking “What was I thinking”, I thought “We’ve got trees. I’ll bet I could do that”. The first question was “How do I convince the wife that we need $500 worth of logging equipment?” After some research I told her “We’ve got to be good stewards of the forest”. By that I meant “I’m going to build a really cool tree swing.” Actually I’m kidding here. It ended up costing a lot more than $500.

I selected a suitable tree, gathered up rope, boards, saws, and axes, but I needed one more thing; the courage to climb up the stupid tree. I thought, I’ll get Wally to help me. He is fairly laid back and had always been nearby whenever I nearly got killed. I choose to think that Wally has experience in life threatening situations rather than, perhaps more accurately, that Wally is a primary cause of life threatening situations.

Calm level-headed thinking is what you need when stuck 50 feet up an Alder tree wondering whether Alders break in half slowly or if they snap in half like a piece of chalk. Whenever one of my spikes slipped I would yell down to Wally, “How am I doing?” Wally would look up, see me trembling, drenched in sweat and sawdust, one leg dangling loosely with the other nearly wrapped around my neck and would shout back the answer least likely to cause him to get up, “You look good to me!”

I spent the entire afternoon cutting off branches with a finicky chain saw while Wally lay on the ground with his hands behind his head making sure I was safe. On the way up the tree I cut off branches leaving a 10 inch section of each branch to use as a foothold. The plan was to then, on the way down, cut the branches off flush with the tree. This was going fairly well until the chain saw ran out of gas. By this time I was exhausted, dying of thirst and my legs had the compressive strength of undercooked oatmeal.

I yelled to Wally, “Do you think this one single 10 inch branch segment will ever be an issue if I don’t cut it off?” Thinking that I might ask him to fetch some more fuel Wally replied “Well, probably not.” This was the answer I was looking for and thus reassured, I finished my descent, kissed mother earth and drank nearly half the nearby creek.

With the swing at a full stop I got on and started my ride, but with a fifty foot swing radius, the ride was long, flat and slow. The only excitement occurred when I drifted uncontrollably into a stand of salmon berries. After cutting down the salmon berries, I figured the best way maximize my investment was to find a higher spot to start from.    I propped an aluminum ladder against a handy tree and was a little concerned by how high up the ladder I had to climb to get the slack out of the line. But what was a little excess height when I had spent weeks planning and building this swing? And hadn’t I just spent half a day 50 feet up a tree? Heights don’t scare me anymore, I thought.

This feeling of macho bravado lasted about one half of one second; the time it took me to jump off the ladder until the rope hit the 10 inch branch which we thought would never be an issue. This single branch remnant shall forever afterward be known in our house as the ‘doink’.

To understand what happened next it is necessary to understand the conservation of angular momentum law which clearly states:

“When the effective radius of a rope swing is cut in half by a short branch sticking out of the tree, an upward acceleration will occur proportional to the quality of advice given during the building of the swing causing the idiot on the swing to scream like a little girl.”

As I floated in the air screaming, convinced the rope had broken or the tree had snapped in half, I was concentrating very hard on the ground wondering if I was going to crash into the blackberries or into the nettles. However, I didn’t crash into the ground. As it turned out the rope had not broken and the tree was intact, but there had been a lot of slack in the rope as a result of being caught and then released by the ‘doink’. Also, through no fault of my own, my butt had stayed connected to the seat of the swing so I could have, in theory continued my journey as if nothing had happened. What I did instead was drag my feet on the ground yelling “STOP-STOP-STOP-STOP!” as my best friend and my 12 year old daughter laughed until their sides ached and their faces hurt. Serves them right.

I have since moved the ladder so that it is nearly impossible to hit the doink without trying. For fun, sometimes my daughter will hit the doink on purpose. She describes this as ‘thrilling’. One difficulty with taking off from the ladder is if you don’t step off far enough, the seat catches and causes the swing to spin in a nausea inducing clockwise direction.

About two years after my maiden voyage, my friend Wally was showing some children how to jump off the ladder and not cause the swing to spin. He did a REALLY good job stepping off, and with no more notice than I had gotten, his rope hit the doink. Wally’s butt did not stay attached to the swing as mine had, but he had enough grip to slide down the rope far enough to have the lower half of his body get drug back and forth between the nettles and the blackberries two or three times.

It was a good thing I was watching because the only sound I heard was sound of flesh being torn by blackberries which is not as loud as one might think. As I was helping stop the bleeding, I said the most appropriate thing I could think of: “Wally, next time you gotta scream otherwise people won’t know to look.”