​The Sad Passing of Willie Nelson, the Dog 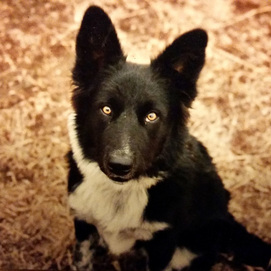 So old Willie Nelson the Dog is gone.... the best dog ever and my best friend as they say. I got Willie when he was 5 weeks old in Whitefish, Montana. He was born in the hills by the logging town of Fortine.

The ex-wife and I wanted to get a dog since we were living in the country on 10 acres and saw foxes, coyotes and even wolves running through the property. We wanted to keep the cats and the horses safe that our neighbors had in our pasture. I went to the pound and they had a full litter of 8 pups that were half Blue Heeler and half Border Collie. Cool looking dogs so I said, “I'll take one.” The pound said, “Go Ahead and grab one.”

I reached into the cage and all the dogs scampered to the back of the cage except for the runt of the litter who stayed right in front, growling and acting tough. So I grabbed him. He was so small when I took him home, he could curl up on a dinner plate.

As he got older, the Fortine attitude came out and he even had to sleep outside during a blizzard due to his bad attitude. (When I woke up to see where he was, he was pressed against the sliding glass door with a foot of snow covering him.)

I decided if I was going to keep this tough badass, he needed to be trained. So I put him in dog training where the owner had to also participate. The trainer said, why have me train him because when he gets home, he'll still think he's the top dog. (You need to be the top dog.)

After several months of training, he really came along. Then we joined the Flathead County Search and Rescue team. He did really well for a 9 month-old dog for several months of twice a week training until the day when we had to practice a Helicopter Hot Load  - running from 40 yards away and jumping up into the helicopter WHILE the rotors are turning full force. Then they took off, went up 50' and came back down. Willie did it three times that day, but boy he wasn't happy.

The next time I came out with my Search and Rescue vest on and said “Come on Willie, Load Up,” he plopped down on his rear end and refused to budge. I said, “Get in the Truck!,” and he shook his head and growled. OK – Fine – your new job is Guard Dog! He was a great guard dog. If ANY people or animals tried to fight (the cats fought All the Time) or argue, he'd jump right in the middle and push or herd the aggressor away.

Flash forward a few years to the Flathead River House I had just bought. I came home from work at lunch one day and Willie was outside on a runner chain (no fence yet). I let him off the chain and told him to stay outside. He barked and growled and damn near almost bit me to get in the house despite me saying “NO!”
As he ran in and I walked behind, Willie ran around the couch and - DAMN - a robber with a big hunting knife jumped up from behind the couch and RAN out of the door with Willie nipping and biting him. (The damn meth head was waiting for me to come in.)  So the great Willie Nelson the Dog actually truly Saved My Life!

Another time I had a fire with the wife that started right above the river bank. Willie jumped up and ran down to the river, barking and going crazy. I thought, “Oh Great, he's attacking the neighbor or a fly fisherman.” So I got up from the fire and went to the river bank. There was Willie, nose to nose, six inches from a big black bear, barking like mad! Then the bear turned around and walked off nonchalantly, with Willie nipping at his butt.

Willie was also a great singer – one of the best for a Dog. When my band practiced, Willie would lay in the middle of the band and sing along, on the Choruses only! He was good. His favorite songs were ‘Willin’ by Little Feat, any high lonesome song or Irish song, and especially Vince Herman and his favorite singer, Micheal Hurley.
His favorite Hurley tune was ‘Old Black Crow.’ Hurley actually played a show in Montana and then came and stayed at my house for a few days. I told him Willie loves ‘Old Black Crow.’ “Watch,” I said and sang a few bars. Willie broke into it also. Hurley liked it so much, he recorded Willie singing the song with him and it's actually on the album “American Boogie,” with full credits! Hurley said Willie's pretty good, but he did miss the timing there at one point. (He was a dog, after all.)

He was so smart that if I said “PATROL,” he'd fly outside and run in a 40 yard circle around whoever he was with to keep them safe.

The last few years after I went thru the big D, he stayed with my parents who he dearly loved. His favorite time of the day was when my parents would go out and sit in the hot tub in the morning and play their Irish music. He'd run out to patrol the area and then sit on the hill above the hot tub and sing/howl Irish tunes; he did this even on his last day. In fact, he went outside for his hot tub sing-along and then came back inside and died shortly thereafter.

He was a special dog. Many times he'd run to the door and start barking, and I'd say, “Who's Here Willie?” He'd bark more so I'd let him out and then about 2 minutes later, my mom would drive up. I have no idea HOW he knew she was near.

Another great trick he could do was when we'd get home and I'd open the door, I'd say “Patrol” (learned from Steve Cox and his dog Turbo) and Willie would run thru the house and bark if anyone was home. He was also great at frisbee and retreiving. He'd bring the frisbee or tennis ball back for hours.

Thyroid cancer killed him five months after diagnosis. We buried him on the banks of McCarthy Creek to the tune ‘Brokedown Palace.’

He came to me in my dreams last night. I loved that dog!